The strange “glow” spotted on the Red Planet by Curiosity is not a sign of life. It is either a shiny rock or a glitch in the rover’s camera, NASA has said. UFO blogger Scott Waring had claimed that the new photograph taken by the rover suggests there are intelligent creatures living underground.Visit here for more:-
Strange glow of light on Mars.

However, NASA said it has now investigated the image, and found it is simply a trick of light.
“One possibility is that the light is the glint from a rock surface reflecting the sun,” a NASA spokesperson was quoted as saying by mailonline.uk . “When these images were taken each day, the sun was in the same direction as the bright spot, west-northwest from the rover, and relatively low in the sky.The rover science team is also looking at the possibility that the bright spots could be caused by cosmic rays striking the camera’s detector.”
NASA’s engineers believe the glow may have been caused by sunlight reaching the camera’s sensors through a vent hole in the camera housing. 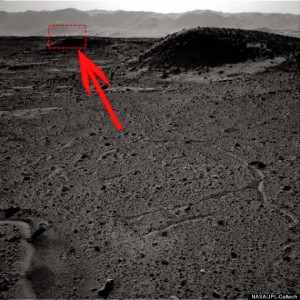 The agency said this has happened previously on other cameras on Curiosity and other Mars rovers when the geometry of the incoming sunlight relative to the camera is precisely aligned. NASA also revealed that such glitches are commonplace. “Among the thousands of images received from Curiosity, ones with bright spots show up nearly every week.” Curiosity takes images using two cameras, one in its right eye and the other in its left. While the image from the right eye shows this bright spot, the same image from the left eye does not.