UPERTINO: Apple CEO Tim Cook is still trying to convince shareholders that the iPhone maker remains a step ahead in the race to innovate, even though recent performance of the company’s stock lags behind other technology trendsetters.
In making his case Friday, Cook struck a familiar refrain during Apple’s annual shareholder meeting at the company’s Cupertino, California headquarters.
Cook promised that Apple is working on new gadgets that will expand the company’s product line-up beyond smartphones, tablets, music players and personal computers without divulging any details. He cited the company’s nearly $4.5 billion investment in research and development during the last fiscal year and the completion of 23 acquisitions in the past 16 months as a precursor of the big things to come.
“There is a ton of stuff going on,” Cook said.
On the financial turn, Cook told shareholders that Apple’s board will announce whether the company will increase its dividend and spend more money buying back its own stock by the end of April. Money management is a major issue for Apple because the company is sitting on nearly $159 billion in cash, including $124 billion held in overseas accounts to avoid US taxes.
On the labor front, Cook pledged to continue Apple’s fight for the rights of the low-paid workers who build the company’s devices in overseas factories. The workplaces are frequently depicted as oppressive sweatshops.
“I don’t think there is any CEO who talks about human rights more than I do,” he said. “I get a lot of spears for it, but I don’t give a crap.”
Cook, who became Apple’s CEO shortly before the October 2011 death of Apple co-founder Steve Jobs, also showed a playful side. He tantalized the crowd by telling them he planned to provide a glimpse at Apple’s upcoming products, but it turned out to be a tease. “I’ve got to have some fun,” he said.
The meeting looked like it would be a tense affair until earlier this month when activist investor Carl Icahn abandoned a high-profile campaign aimed at pressuring Apple’s board to increase the company’s $60 billion budget for buying back its stock. The company has already spent more than $40 billion of that amount.
Most shareholders at Friday’s meeting seemed supportive of Cook, although a couple expressed frustration with Apple’s stock price when he took seven questions from the audience.
Investors are worried about the company’s shrinking market share in the smartphone market as its rivals introduce a wider selection of devices offering lower prices and larger screen sizes. Wall Street is also wondering if Apple lost some of its inventiveness with the death of the visionary Jobs.
Apple’s stock dipped $1.43 to close Friday at $526.24. That’s 25% below its peak price of $705.07 reached September 2012. Over the same stretch, the stock of Google – a bitter rival – has surged by 66% and the technology-driven Nasdaq composite index has gained 35%.
Cook told shareholders he isn’t worried, noting that Apple’s stock has struggled over other stretches in the past 15 years, only to soar after the company released breakthroughs such as the iPod, iPhone and iPad. The stock might fare better if Apple revealed more about its future plans, Cook conceded, but he said the company intends to hew to Jobs’ hush-hush philosophy to build consumer anticipation and prevent rivals from getting an early start on copying its ideas.
“We think the element of surprise is important,” Cook said.
Analysts are convinced the next iPhone will feature a larger screen than the four-inch display that was introduced in 2012. Other smartphones boast five-inch and even six-inch screens that appeal to people who play a lot of games or watch a lot of video. Speculation on new product categories that Apple might enter includes a high-tech watch that could monitor the user’s health and a long-rumored television set that would run on the same software as the iPhone.
Although he didn’t discuss a potential TV set Friday, Cook revealed a new statistic indicating the company’s $99 set-top box for streaming Internet video is becoming increasingly popular. He said the box, called Apple TV, generated more than $1 billion in revenue during Apple’s last fiscal year. That figure implies Apple sold more than 10 million of the boxes last year. 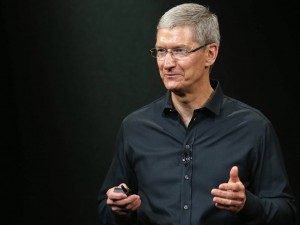