Ubuntu 14.04 LTS desktop
Canonical has launched Ubuntu 14.04 LTS (Trusty Tahr) today, along with all the flavors that usually accompany the release of the new operating system.
Every six months a new Ubuntu version is released, but every two years Canonical makes an Ubuntu LTS (long-term support) that aims to provide the most stable and up to date experience possible for the users.
The LTS denomination means that Ubuntu 14.04, dubbed “Trusty Tahr”, will be supported for the next five years, for both the desktop and the server edition. It also means that Canonical will continue to issue patches and updates until 2019.
Ubuntu 14.04 LTS (Trusty Tahr) is based on Linux kernel 3.13.9, which is one of the latest versions issued. The developers couldn’t get a newer build, like 3.14, into the latest version because it arrived too late in the development cycle and there wasn’t enough time to test it.
In any case, the new Ubuntu is one of the most exciting releases since the previous LTS, which was all the way back in 2012. Since then, Canonical made another three versions, but none of them managed to get the kind of hype that is surrounding the “Trusty Tahr” edition.
As usual, you will be able to upgrade from previous versions of Ubuntu, starting with 12.04. The procedure should be painless, but keep in mind that this is not just like a fresh install. You might get to keep some settings and other customizations, but you won’t be able to fully enjoy the performance boost that comes with the new edition.

Ubuntu 14.04 LTS (Trusty Tahr) proved to be very fast and reliable since early development. It even felt faster than Ubuntu 13.10, which was released in October 2013, not that long ago. The developers upgraded to a newer GNOME version, 3.10, but they also updated Unity and that made quite a difference.
The features in the new Ubuntu edition are too many to count here, but we have prepared a comprehensive review that should underline everything that has been implemented. Even if it might not be apparent, Ubuntu 14.04 LTS is bringing so many changes that it will probably become an instant hit, at least among Ubuntu users.
The images for Ubuntu, Kubuntu, Xubuntu, Lubuntu, Ubuntu GNOME, and all the other flavors are to be released today, although the exact time is not known.

Keep in touch with TechNotification, we’ll be providing fresh updates about this release along with reviews and download links!. 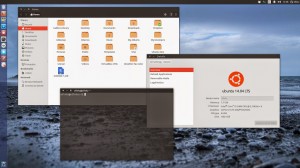