World’s most popular social network, Facebook, is going to tweak its privacy features again based on user-feedback. The company is going to bring three major changes which are currently in development and testing phase. Some reports suggest that the changes might already to visible to some users on the Facebook website. Facebook says that it conducts more than 80 trillion privacy checks per day to ensure that users haven’t shared their posts with wrong people accidentally. The social network is infamously known for changing its privacy policy every now and then.

“Some people have felt Facebook privacy has changed too much in the past, or we haven’t communicated as well as we could have,” said Michael Novak, Facebook product manager. “Now we’re thinking about privacy not just as a set of controls or settings, but as a set of experiences that help people feel comfortable.”

1. Audience selector:
Users are able to manually select or make lists of people with whom they wish to share a post. All of you Facebook users must be familiar with the “Public” and “Friends” options in the drop down menu that you select during sharing your status. Facebook will start elaborating these terms from now on and explain what those terms really mean. A new dropdown menu will be added which contains small descriptions such as “Anyone on or off Facebook” and “Your friends on Facebook.”

2. New-style Sharing settings:
Facebook has now moved the audience selector to the top of the mobile interface right above the status. Earlier, it was placed right above the keyboard next to smiley, location and other icons. The new change also elaborates the sharing setting as it gives a proper title to whom you are sharing your content with, such as “Friends” and “Public”.

4. Private cover photos:
Till now, cover photos have been public by default but a new feature will be introduced in a few weeks which will let users make their cover photos private. 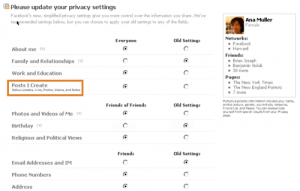