The event was announced on the Nokia Conversations website, in a post titled as “If you BUILD it, they will come…” It is highly likely that both the firms may team-up and release the new Nokia handsets running the Windows Phone 8.1 OS at the Build Developer Conference event. Reportedly Nokia could announce four new devices that include the Lumia 530, Lumia 630, Lumia 635 and the Lumia 930.

“What makes 2014 so special is the exciting Microsoft and Nokia partnership, and boy, have we got some treats lined up for you,” added the announcement post.

Lumia 530 aka Lumia Rock is likely to be the successor to the Lumia 525 and this affordable smartphone is likely to feature dual-SIM card slots and onscreen buttons. Reports suggest the Lumia 630 will arrive in single-SIM variant featuring a 4-inch display, Snapdragon 400 processor and 1GB of RAM. It too will boast onscreen buttons, but won’t get a dedicated camera button or flash. Dual-SIM variant will be dubbed as Lumia 635. Lastly, the Lumia 930 aka Martini will be a higher-end device with features like a 5-inch high-definition display, a quad-core Snapdragon processor and a high-resolution camera.

The chances of Microsoft releasing its Windows Phone 8.1 OS also seem bright as the firm has already rolled-out the ‘confidential’ SDK files to developers, which revealed a number of upcoming features via leaks. 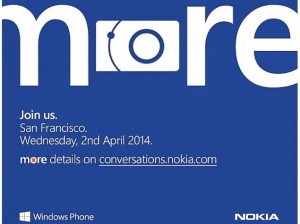