Nothing ear (1), Carl Pei’s first product, is now available. People had no idea Nothing could create such hype around what would become the first truly wireless earbud. Carl  Pei, formerly founder of OnePlus, left the company last year to launch his own venture.

If there is one thing big tech companies like Apple, Samsung, Xiaomi, and Oppo can learn from a small startup, it is the design. How to keep your product design confidential until launch, something large IT companies have been dealing with.

“We had predicted that Nothing’s ear (1) could be the long-awaited TWS segment push, and we are pleased that our prediction has come true. The transparent ear (1) is unique. The most important thing is that consumers will not feel like they are using a product that five separate businesses designed. “

Carl Pei said this during the virtual global ear (1) reveal on Tuesday.

Our experience is still under embargo, so we will stick to the product shots revealed by Nothing.

The ear (1) product pictures are good signs for anyone who values aesthetics and seeks out distinctive propositions. For starters, it is unlike anything we have seen.

The transparent design allows you to see the microphones, magnets, and circuit board on the earbuds. Teenage Engineering designed the ear (1) and is one of the original partners of Nothing.

Nothing’s transparent design concept extends to the charging case. It has a 570mAh battery and enables wireless and rapid charging. The overall package is distinctive in our opinion and should impress design enthusiasts.

Everyone must appreciate that Nothing did go overboard with transparency on the cover and earphones.

Instead, it features hard plastic on the earbud and casing. This is a great balance to the design seen in the official images so far.

The fact that the earbuds’ real design was not known until the debut kept fans and enthusiasts glued to the YouTube live broadcast made the ear (1) launch thrilling. This was unusual.

The ear (1) was not ruined by leaks or rumors, and large corporations should learn from Nothing. Transparent earphones are rare for a reason.

According to  Manu Sharma, Vice President and General Manager, Nothing India, before the launch, and he explained the ear (1) design background. “For example, it does not have L or R marks on the earbuds like everyone else. Instead, it has a distinctive feature.”

“It has a red color signal that notifies that it’s for the right ear,”

Sharma adds. According to him, the earbud includes pressure-relieving vents and the ear (1) is intended to give improved comfort.

Sharma also talked about how difficult it was to pull together diverse design elements like the glass shell and the adhesive work for a product like nothing’s earbuds.

Also, two magnet manufacturers along the way did not contact because polishing the magnets required extra work, and not everyone wanted to spend extra effort on little things.

Pei had previously discussed the challenges with magnet manufacturers.

According to Sharma, designing a device like the Nothing ear (1) with a transparent body is difficult. There is a reason why no one is introducing earphones or any other product with this design philosophy.

Among other reasons, manufacturing plants do not support such designs because they require extra effort, and most OEMs do not want to take on such a design burden.

But the Nothing earbuds are not just a design. Some expensive truly wireless earphones might be discouraged by certain characteristics.

It has active noise cancellation, Bluetooth 5.2, and fast charging. In-ear recognition, wireless charging, and up to 34 hours of music playback with a charging case are all important features for TWS.

They have also announced a dedicated app called ear (1) that allows users to customize features like Find My Earbud, Equaliser, Active Noise Cancellation, and Gesture Control. It is also IPX4 certified for sweat and water splash resistance. 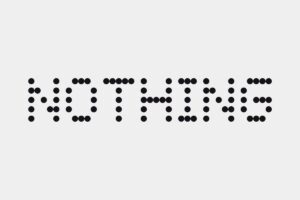