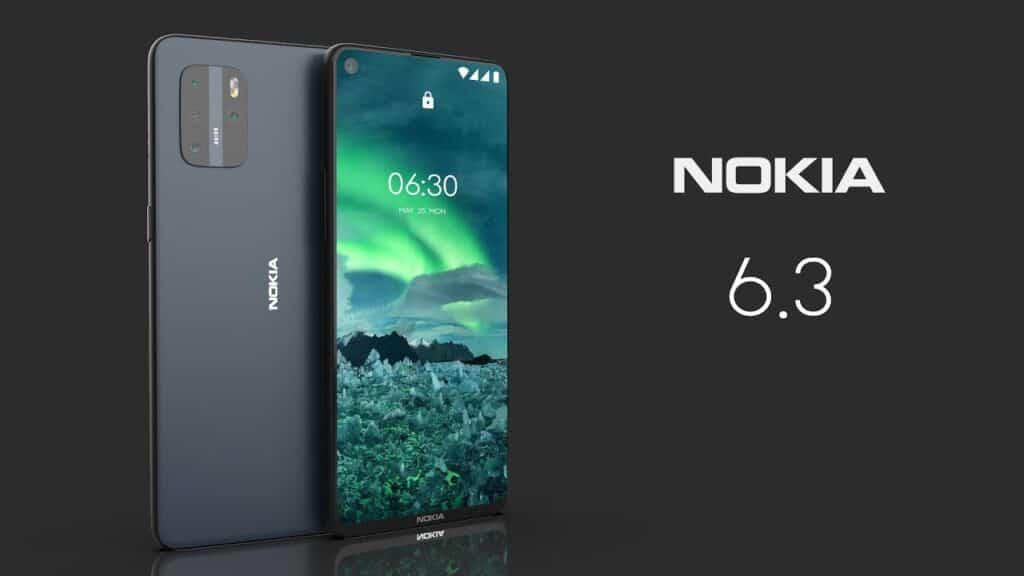 Among the anticipated Nokia devices is the Nokia 6.3 that is still under the wraps about a year after it was first reported. And over this time, some rumors began calling the Nokia 6.3 Nokia 6.4 because HMD Global’s harmony is expected to maintain (Nokia 2.4, Nokia 3.4, and Nokia 5.4). The information on the Nokia 6.3, aka Nokia 6.4, has been scarce, but we are now seeing what could be the first proper renders of the upcoming Nokia phone. The Nokia 6.3 may come with a large display with a notch, a side-mounted fingerprint sensor, and a quad-camera system on the back.

Nokia 6.3 did not launch last year as expected, but when launched this year, does it come as Nokia 6.3 or Nokia 6? Or maybe with Nokia 6.5, as we already had the “dot 4” models last year and expected successors to launch “dot 5″ suffixes this year. We are confident that you will agree that HMD Global will definitely need to rethink its naming system, but that is the way it is.

A leak has emerged, which gives us our first look. The next Nokia 6 model, which we hope will be clarified, is launched as Nokia 6 (2021). The source of the leak is Steve Hemmerstoffer, a.k.a OnLeaks, and has provided us with a mid-range offer in the range that was first posted on Voice.

The Nokia 6.3/6.4 looks similar to the Nokia 6.2 and packs a waterdrop notch display that measures 6.45” diagonally. The smartphone shares the circular camera island with the 6.2, but it now houses four cameras, and the LED flash has been moved outside the module.

Nokia 6, such as Nokia 6. We are sure that this will disappoint those expecting a punch-hole display such as the Nokia 5.4 and Nokia 3. The screen is said to be larger than the one before 6.45. -inches, and we expect that it should also have an FHD+. Four rear cameras sit in a circular house with a pill-shaped LED underneath. Camera details were not disclosed, but last year’s leak means the phone will have ZEISS lenses.

Lenses Unlike Nokia 6.2, Nokia 6. 4 does not have its fingerprint scanner on the back.HMD Global has decided to move it to the right side of the frame, where it sits under the volume rocker. There is an audio jack at the top of the phone and a single button on the left for Google Assistant.

The successor of the Nokia 6.2 comes with a circa 6.45-inch flat display that features a water drop shaped notch and fits in a chassis that measures 164.9mm high, 76.8mm wide 9.2mm thick (10.1mm with the rear camera bump).

A notable design difference on Nokia 6.3/4 is the fingerprint sensor. Its predecessor posited the sensor on the phone’s back, but Nokia will now embed it in the power button on the phone’s side, just below the volume rocker.

A dedicated additional button has been added on the phone’s left side as a shortcut for the Google Assistant.

The Finnish company has signed up for a new chipset, and Nokia 5.4 was launched just a few weeks ago, so it’s unlikely to be an immediate successor. The Nokia 3 series will also remain on the 4G line, leaving Nokia 6.3 / 6.4 as a phone that may be released on the Snapdragon 480. 5G processor.