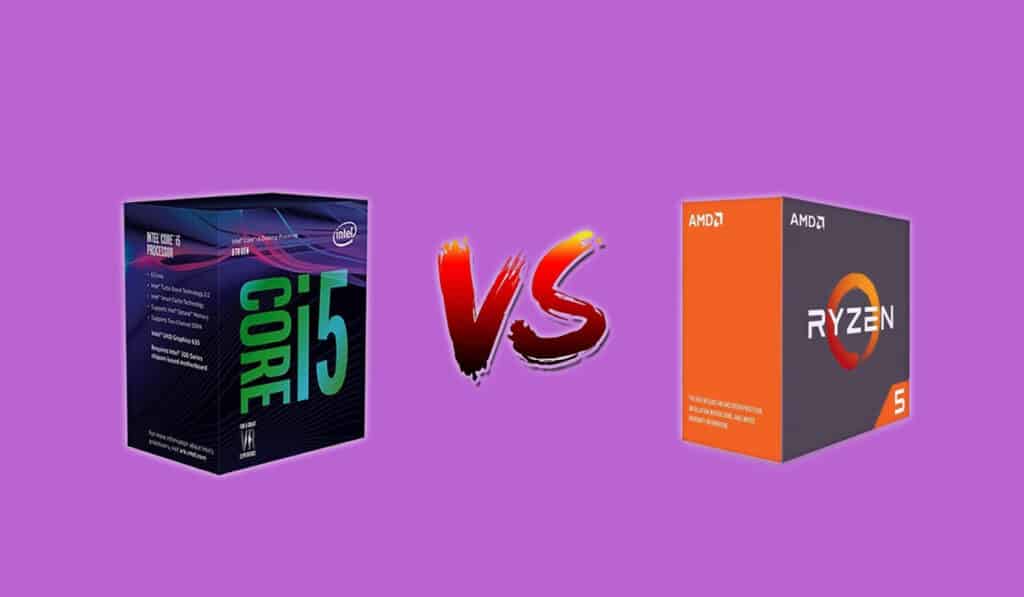 With the rising competition for decades, it seems both the processor manufacturing giants are finally able to offer their customers high-performance CPUs without compromising cores or price. It’s Team Blue vs. Team Red. The 8th gen Intel i5 going up against the mighty 2nd gen Ryzen APU. Today I’m gonna be introducing you guys to some interesting hardware for the mid-range gamers and content creators. And of course, I’ll be covering the benchmarks with stock and overclocked speeds.

First, let’s speak some numbers for the geeks out there. The blue Coffee lake (i5) chip offers 6 cores 6 threads, based on 14nm technology; has a base clock of 2.8GHz and goes all the way up to 4GHz with turbo boost. It has a TDP rating of 65W and comes packed with an IGPU “UHD 630” with clock speeds from 350MHz to 1.05GHz. The processor supports up to DDR4 64GB ram, has L3 cache of 9MB and most importantly has an LGA-1151 socket which means you’ll be looking for the Z3XX motherboards. And the CPU is priced at “very competitive” $182 USD.

Next up, the Red counterpart. The red chip (Ryzen) offers same 6 cores but 12 threads based on 12nm technology. This monstrosity of an APU has a base clock of 3.5GHz and turbo boost clock of 3.9GHz.Its rated at 65W TDP and with the right cooler you could stretch its legs till 4.2GHz. It supports a maximum 64GB DDR4 RAM and has 16MB L3 cache. This APU runs on AM4 socket which means, you would be looking for mobo’s of series 320, 350 for mid-range gamers and the chip comes at decent $199 USD. Seems like Team Red is the clear winner on paper. But let’s see what the numbers got to say about this result.

Coming to the numbers we actually care for, keep in mind that the gaming benchmarks were done at 1080p, with a Zotac GTX 1080Ti AMP Edition; at max settings and all the values are actual real-time average values and speak for neither recording nor streaming gameplay. Both the chips were tested with similar hardware except for the motherboard.

b. Overclocked to 4.2GHz

First up we’ll take a look at the Non-gaming benchmarks.

Next up, we have Adobe Premiere Pro CC where we’re exporting an MP4 2160p/4k 60fps file with time in secs(lower is better xD).

Phewww!! Now let’s take a look at the gaming performance of both the chips. To accommodate 12 games and for clarity sake, I had to split benchmark results for each chip.

From the above data, three major conclusions can be drawn.

It’ll eventually come down to what you get for the additional 10$ over the i5. The Ryzen offers raw performance and support for overclocking but the only downside to that would be investing in a good motherboard and a PSU (*never cheap out on a PSU). I would personally recommend the Red Team and experiment with overclocking if that’s your thing, enjoy faster exports and also brag about those FPS values with your friends! That’s it for the mid-range CPUs for the day. Feel free to leave a comment down below and share your thoughts on this comparison. I’ll see you guys in the next one!