China is the world’s largest producer of cocoon silk, i.e. around 800,000 tons per year.

As we commonly known about silk is that it can be used in clothing, beyond this it can create many things like medicine, to electronics, and household goods.

Scientists have done experiments with a new usage of silk, which is a fiber that dreams are made of, so let us see which of those.

The healing ‘microchip’ under your skin

“The circuit board is made from magnesium, on a film of silk,” explains Fiorenzo Omenetto, Professor of Biomedical Engineering at Tufts University in Massachusetts.

This tiny thin, centimeter-long square of silk with a bit of stamp can be implemented under the skin to kill infections. This can be applied on animals too which is suffering from a deep infection. “Put a band aid on and turn on the device wirelessly and the resistor inside the animal heats up and the heat kills the infection — two weeks later the whole device is dissolved”.

Silk is not only having the capacity to heal but also help is environment like, a coffee cup entirely made up of silk which is bio degradable.

“A silk cup can be thrown away without harmful effects to the environment — unlike a polystyrene cup,” says Omenetto.

Can you believe silk can act as a preservative? Yes it does, silk acts as a stabilizing coating for food.

“We are experimenting with thin silk coatings on fruit that prevents them from rotting at room temperature,” adds Omenetto.

“We made these implantable light sources where the LEDs light up wirelessly when next to a charging station — similar to the technology used in wireless hotel entry,” says Omenetto.

A tiny silicon chips with 250 nanometers thick will be attached to the silk base which is molded to the shape of the skin with a saline solution. 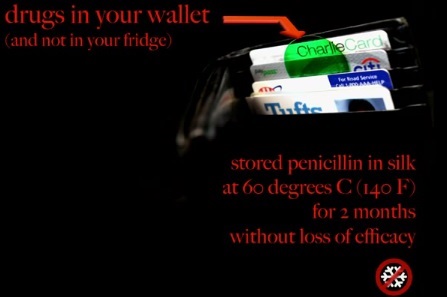 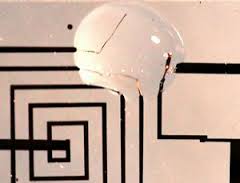 The main characteristic of silk is to hold other substances; means if the medicine is injected to a human body then it slowly release the medicine inside the body. Omenetto give a very good example to understand this concept i.e.

“So imagine for a fractured leg, if that screw was filled with medicine, it could be used to deliver drugs at the same time, while your bone is healing.” explains Omenetto.

“For example, we could print on a latex hospital glove, cover it in silk with these other chemistries, so that when you wear the gloves and touch a contaminated surface it would change color to red,” he explains.

These amazing stuffs has so many uses which blows our mind in future for sure.