Technology is a tool. It is used to build many new and better applications that not only make human work easier but also can play a major role in the uplifting certain sections of the society. This is a question of utmost importance when we observe the entire global population as a whole. There are many countries badly stricken by poverty. Billions lie below the poverty line, live on roads and have meagre meals. In such situations, drastic measures are required to provide them with better living conditions. This initiative is taken by Vo Trong Nghia Architects who are trying to build a low cost house.

This initiation is mainly taken to cater to the housing needs of Vietnamese beggars who live in sub-standard conditions. They have named these prototypes S- houses. These S- houses are low in cost and provide a stable structure. Though they nothing like the fancy apartments but they are more than sufficient to provide enough living space for a small family, and the building time just takes under three hours. The S- house gave its first appearance in November when it was first installed in Ho Chi Minh City. It proved to be an immediate success. 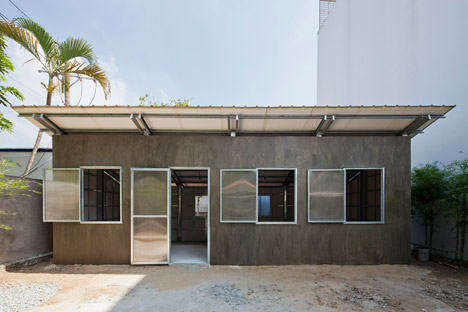 The S- house has no separate partitions for rooms but instead it offers one single enclosed space measuring 31.6 sq m (340 sq ft). The residents can utilize the space proportions suiting their needs by making partitions. The S- house’s latest prototype consists of cement board cladding help up by lightweight steel framework upon a reinforced concrete foundation. Its structure provides it extra stability and resistance to extreme weather conditions like heavy rains and storms. The main aim of this project is to provide fundamentally strong and affordable houses to those who spend their nights beneath the starry skies. This structure also has the potential to withstand mild earthquakes and other natural disasters. Proper ventilation facilities are also provided in this house. The S- house has a small gap between roof and walls and there are also many operable windows to facilitate proper ventilation. Another important factor is its weight which was kept in mind while designing it. The entire compound weighs around 1,200 kg. The sub components each weigh around 60 kg before assembling. So it is relatively very easy to transport it and build it even at a far off location. Once the building components reach the targeted site, the countdown begins. It requires skilled engineers to build it only in three hours. To passersby it may seem as if a house has suddenly popped out of the ground as if some magic was involved. It provides a stable living environment that needs very low maintenance and whose maintenance is relatively very easy. The expected cost of S- house is still eagerly awaited but it is assumed to be under $4,000 budget bar. The firm hopes to eventually start selling the homes all over Vietnam, South East Asia, and elsewhere, including India and African countries. This house serves as a perfect sanctuary to those in need.