The modern world is full of new technologies. New technologies which includes modern gadgets, future technology bikes and cars etc. Every human being is capable of using all these technologies, but modern technology gadgets are not only made for an able person, the technicians are trying to make devices and gadgets for disabled people too. Today, a mobile phone is used by almost every person. It is a device which connects one person to the whole world. It may be very useful, though it is the most important part of an individual. But the main problem which arises is that mobile phones may not be used by deaf and vocally incapacitated people, so technical engineers are trying to make a mobile phone for deaf people, so that they can also use mobile phones and stay connected with the world. Hence they came up with their concept, Visual Sound Device, a mobile phone for hearing impaired users. Visual sound is a phone concept for deaf people and it comes up with transparent touchscreen. 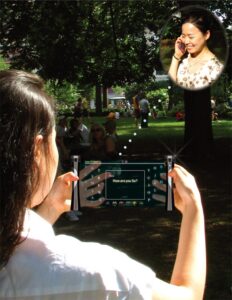 We don’t give much thought to deaf users about cellphones, but Suhyun Kim, a student from the Pratt Institute has worked hard on this stunning Visual Sound concept, which converts voice to text and vice versa. She wants them to enjoy technology as much as we do. As this phone will act as a voice-to-text converter, so whenever the disable person receives a phone call, the conversation will be transformed into a text which is displayed on the transparent screen. To respond to the call, Visual sound mobile phone concept provided a QWERTY touch board where the disabled can type their thoughts in. This Visual sound device is design with features including two handy pillars that scroll sideways to expose the roll-out display. For communication, the impaired person feeds in the text onto the touchscreen display, which gets converted into voice simulation for the person on the other end of the phone and vice versa. If this Visual Sound concept ever got put into production, many people will try to snag the first one, just because it looks great and it might help a person when someone phoning from noisy locations, as they are prone to do telephone calls from noisy locations. There will arise a problem, that when the normal speaker speaks a lot, because the text on the screen are limited to several hundred words as it was configured. So the time which is required by the impaired person to reply back to the normal recipient is not sufficient. So the normal person has to speak less to overcome this problem. Ultimately the overall drawback that I foresee is the time taken to input the text and converting it to sound. It may block long distance calls, but on the other side it is a form of communication for deaf people which is better than being mum. 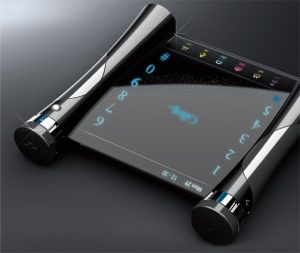 This concept mobile phone sounds a bit time consuming and perhaps a bit frustrating to use, but it allows us an easier conversation than text messaging back and forth. So we can say that it looks dreadfully futuristic and if it’s solving a problem for people who are deaf, then it may be a boon for them.