Today’s world is full of gadgets which are newly invented. Gadgets, which includes mobile phones, laptops, I-pod etc. About 90% of the new generation, everyone has his own gadget. Gadgets may work on electricity, so it’s the basic requirement for a gadget holder. As electricity is easily provided everywhere, so it is easier to charge an electronic gadget. But it is not sure that every travelling medium has electricity availability. For example, at the time of travelling in local transports, it is not possible to charge a gadget. So technicians invented many sources of charging a gadget, which are easy to carry and handy like “Mobile charging battery bank”. Battery bank is easy to carry and smaller in size and even it is not so expensive, but it gives a limited supply of electric charging. It can be charged time to time. But development never ends. Innovators have renumber the technology to benefit humans and the world we live in. So the technicians launched an open source 3D printed wind turbine named as the Air Energy 3D (AE3D) wind turbine. As we all know that Wind turbine is a renewable source of energy. AirEnergy3D is clean and renewable source of energy that saves you money and saves the environment from pollution. Air Energy 3D prototype is a portable energy generator that can produce up to 300 Watts of power. This project aims to produce an open source 3D printed wind turbine that could produce the power. It is designed by Polish 3D printer manufacturer Omni3D. 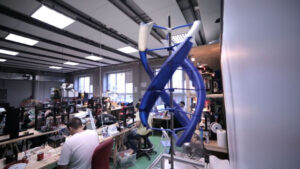 The AE3D manufacturing team hopes to turn their mobile wind turbine into reality, with part of its goal being to allow developing regions to create reliable and renewable power sources. The AirEnergy3D is a compact design which is enough to fit into a backpack, so that it can be easily carried on outdoor trips. It is contemplated to be easily assembled and disassembled without tools. This device is intended to be compact enough to be taken at the time of camping or anywhere else that there is a breeze and no access to the electricity supply. It can easily charge a mobile phone, directly via built-in USB cord. The company claims it is focused more on giving back to the community and conserving energy rather than profiting largely from the crowdfunding campaign. The company numerate that availability of this turbine is limited. But soon, we will get enough supply of this turbine. The open source plans mean that anyone will be able to build their own turbines with their own materials. The company claims that Once it is fully developed, the creators of AirEnergy3D promise to upload all the technical data pertaining to the design for everyone to use free of charge.

Most of the designs of AE3D are printed by a standard 3D printer which is generally easy and cheap. So the team will provide soon, a basic kit of parts that are unable to be 3D printed, along with a set of downloadable 3D plan views for each of the supplied parts and assembly instructions on how to incorporate them into the device. For positioning and better flexibility of this device, the manufacturers of AE3D are developing a mounting system that allows AE3D to be installed safely and easily on several surfaces in many adverse weather condition. It is basically a working proof concept, but you can still purchase this wind turbine for $497 (£299) however if you’re quick. . As this electricity generator cannot produce much amount of electricity, it may not be able to provide enough energy to keep a whole household running, but it can definitely power a laptop, smartphone, electronic appliances and plenty of other gadgets running but who knows, in future we can even charge all the household equipments with the help of AE3D. As technology advancements has no end.