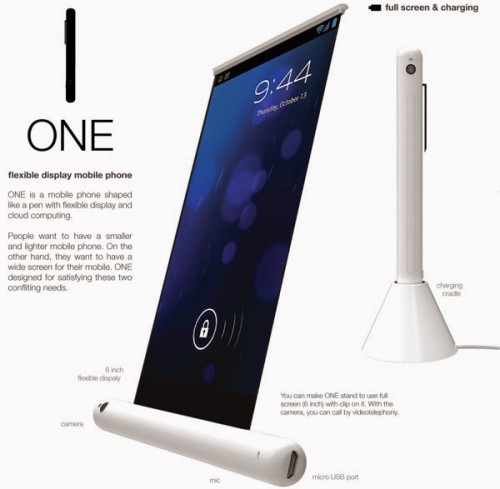 With the dawn of this century the world has witnessed a tremendous increase in the technological evolution of the mobile phones. We have moved on from bulky prototypes to compact and easy to carry cell phones. The modular designs have changed from dial pad to touchscreens. Even more advanced gadgets have hit the market like the notepads and tablets. And with these, have come new ideas, much more sophisticated one’s, that are not yet to be physically realized. These concept phones have given the world a new insight as to what is in store for us, what the future beholds. With Apple, Nokia and many other companies running neck to neck in this competition, it is obvious that Samsung could not hold itself back and it has presented the world its new brilliant idea of ONE- a pen size concept phone.

This might not be a problem for enthusiasts, that’s for sure, but it becomes a deal breaker for those users looking for a smaller form factor with similar capabilities inside. The design of the Samsung ONE is presented by Yejin Jeon on Yanko Design. Samsung One is so small that it could easily be mistaken for a pen. It is not larger than a pen, nor is it much heavier either. However, it is certainly lighter than a smartphone. The Samsung concept relies on cloud computing and involves a wide screen display that comes out of the pen. This screen is a 6 inch bendable sheet and at the edge of the pen we also have an embedded camera. You can make ONE stand in order to use the 6 inches of screen estate to their full extent. When the display is inside the pen there’s a small touchscreen on the side of the pen. This one allows you to control the device and has the role of showing notifications, signal, battery and more.

There’s a speaker at the edge of the device and a lock at the other. The brilliant thing about this device is that you can pull part of the flexible screen of the ONE and use it as a camera viewfinder when you turn the handset’s camera on, that’s very, very cool. I say that such a product is doable with today’s technology, but it could end up being much thicker. The display is ejected from the pen-like body like a scroll and the body holds a camera sensor near the top, a speaker opposite the image sensor and a micro USB port at the bottom. Along the side of the pen body, or what would be the top of the display pull-out, a smaller panel displays some notifications and other device status information, such as a battery meter, wireless signal meter, alarms and time. ONE is a very clever design. And it answers one of the growing issues with smartphones of late: pocket real estate. These were the features yet promised to us but we can honestly expect to get a little bit less than we hope. As up to this point it is inconceivable.
Share on Twitter Share on Facebook Share on LinkedIn Share on WhatsApp

3 thoughts on “ONE- Pen Size Phone”