An era ago, the picture of future was painted in bright colors, totally hi-tech with flying cars and moving pavements just like the escalators do. The famous 90’s cartoon ‘The Jetsons’ created this image in everyone’s mind and it was true to be so. And today as we have witnessed the proceedings of mankind, the image has changed in full contrast from bright to murky, from green to devastated, from flying cars to drones. But let’s not be so harsh into judging the circumstances, though how much we neglect it will come true. Speaking of drones, there have been many conspiracy theories about how micro- sized drones are already spying upon our life, the reality in this matter is concealed in complete shadow. But one such invention is grabbing the spotlight of the day, the Hoverbike, being considered an advanced version of drone. 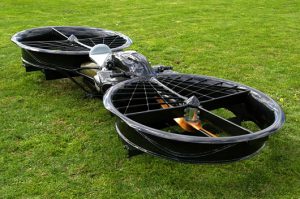 Control of the Hoverbike is done completely via the handlebars. Forward and reverse movement is controlled via the motorbike-like handlebar grips. The right grip increases the thrust, while the left grip controls the angle of the control vanes positioned under the rotors to pitch the nose of the Hoverbike down – for forward movement – or up – for moving backwards. Meanwhile, turning is achieved by turning the handlebars left and right, just like a motorbike but with an extra axis that lets them rotate up and down a little, which alters the angle of the front and rear control vanes. With more than a week remaining before the Kickstarter campaign concludes, its funding goal has been exceeded and development is moving forward at pace. Though the manned Hoverbike is what tends to garner the most attention, the one third scale drones are actually the focus of the Kickstarter effort. The quadcopter drone can be accompanied by an anthropomorphic, 3D-printed figure known as Cyborg Buster, which features a space to fit a GoPro camera in its head. The drone is capable of following the pilot, following a predetermined flight path, and even has the ability to perform automatic take-off and landing maneuvers. 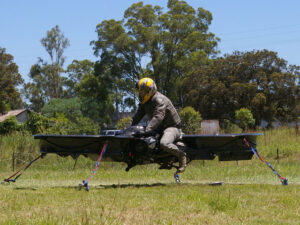 The time has come when hovercrafts and hoverbikes are no more a thing of the future. The carbon fiber Hoverbike weighs 231 pounds with a maximum takeoff weight of 595 pounds. On just the primary fuel tank it has a range of 92 miles at 80 knots (92 mph), with a theoretical top speed of 172 mph and a maximum altitude of 10,000 feet! So far, all tests have been tethered so these performance figures are somewhat speculative, but if he gets into the next phase of actual untethered flight, we’ll know whether those numbers can be achieved. The Hoverbike is actually designed for utilitarian purposes like search and rescue, power line inspection and the like, but I can’t see this staying out of the hands of thrill seekers who have always dreamed of a bike like this. If Chris Malloy’s Hoverbike works as it’s designed to work, there’s going to be a long line of customers waiting for a chance to get on board, this twin rotor BMW boxer powered hovercraft, no, a flying motorcycle, will do more than give you the feeling of flying, you’ll BE flying.