Google I/O is just around the corner and we should expect some interesting announcements on 25-26 June. While Google has got most things sorted on the mobile front and there will be evolutionary announcements on the Android OS front, there is one area where Google has not tasted as much success as it would love to – the TV platform. Thanks to reports from The Verge and recently GigaOm, we are most likely going to see the announcement of Android TV at this edition of Google I/O.

In the 2010 Google I/O, we had seen the announcement of Google TV, which attempted to combine the best of web and TV. Companies such as LG and Sony had announced TVs with Google TV integration as well. This was supposed to be bundled with major TV brands, but for reasons best known to Google it did not taste roaring success, considering Eric Schmidt, the then CEO had proclaimed that most TV sets would have Google TV on board by 2012.

Google came out with two hardware products – the Nexus Q and the Chromecast – last year. Of these, the Nexus Q which was a streaming device which required a second screen device as a remote control and could only play content off Google Play, Movies and TV shows from the Google Play Store, was discontinued by Google. On the other hand, Chromecast has been a relatively successful device from Google when it comes to streaming content to a TV. However the number of apps which support the Chromecast is still rather limited.

Long story short, Google has not yet cracked the TV platform. Will Google I/O 2014 see that changing? Only time will tell. But let us see what we know so far.

Android TV is a platform on which a lot of video content providers will build apps. This platform can be used by TV makers and set-top boxes to bring streaming services to the TV. Unlike Google TV which had a similar philosophy, Android TV will concentrate on online media services and Android based games.

Android TV will have a horizontal set of scrolling cards which represents different kinds of content – TV shows, movies, apps and games. There is a universal search bar at the top where you can either type in your search term or speak out your search term as it does voice searching as well. This definitely seems inspired by Amazon’s Fire TV which supports voice input for searching video content. According to Gigaom, the internal codename Pano basically lets the apps place individual content cards right on the homepage (instead of just the app logo) which reduces navigational steps towards approaching content.

Universal search across apps
Google TV was about every video service providing app having its own content, and you would have to enter the app to search the content within it. With Android TV, Google is planning to have a universal search for content across apps. So if you are searching for a TV show, it needn’t necessarily be from within a particular app (although there will be a provision to do that). Also according to the documents obtained by Verge, Google is getting developers to develop apps which have consistent interfaces. Big names such as Hulu, Netflix, Vevo and so on are already seen in the screenshot. 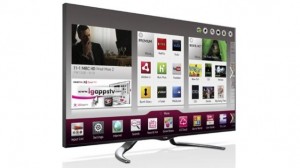 LG was one of the first TVs tp incorporate Google TV. With Android TV that will not be the case thanks to its commitment to developing webOS based Smart TVs

Google had partnered with LG and Samsung, when it had announced the Google TV back in 2010. With Android TV, LG will most likely not be a partner, as it is developing its own webOS Smart TV and ultraHD TVs. This leaves companies that do not have their own platforms such as Sony and Chinese makers such as Haier and so on.

Wooing casual gamers
Another big segment that Android TV is looking at is attracting the casual gamers. With Google supporting games on Android TV, it gives casual gamers a chance to play their favourite mobile games on the big screen TV. Amazon’s Fire TV and Roku 3 offer gaming functionality with Amazon even having a separate gaming controller. Android TV could certainly provide some competition in this area.

With the Android TV platform, Google is looking at creating a universal smart TV platform, something that the likes of Roku, Amazon’s Fire TV and Apple TV have tried to do with their set top boxes. Maybe Google has some more plans in the offing regarding Android TV. We shall find out more details at this year’s Google I/O.

1 thought on “Things to know about Android TV”