If you are owner of Samsung Galaxy S5 or HTC One M8 smartphone, did you see the new logo below the main logo when you boot up the phone? Yes, there is a new brand “Powered by Android” emblem.

The two new smartphones have now adopted that branding, since Google is to launch the new rules for device that runs on Android O.S. .Google is passing this to all Android manufacturers that include its services (Gmail, Google Maps, etc.) on their devices to prominently display the same “Powered by” stamp.

In addition, Google has also adjusted the placement of the “Powered by Android” brand. The logo should be placed at the bottom of the screen with a size of at least about 40% of the width of the screen. Google is also not allowing manufacturers (OEMs) to modify the logo for any reason. 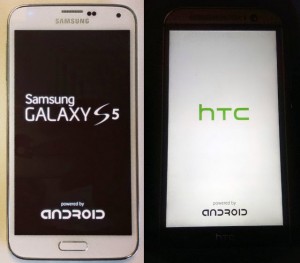