Skip to content
Facebook users will soon be able to receive notices on their mobile app when they’re near friends, signaling an effort by the online social network to play a bigger role in real-world interactions. 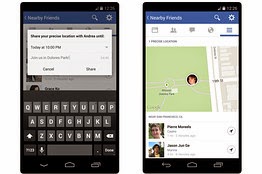 Users will have to opt in separately to the feature, called “Nearby Friends,” and agree to give Facebook permission to track them at all times, even when not logged into Facebook.

Facebook said it will introduce the service gradually in coming weeks. Users of Facebook’s mobile app will get notifications prompting them to opt in.

Some privacy advocates expressed concerns about the implications for users of opting into the service. Chris Conley, a policy attorney with the American Civil Liberties Union of Northern California, said Facebook should keep users “regularly aware” of everyone with whom they’re sharing location. Jeffrey Chester, executive director of the Center for Digital Democracy, called on the Federal Trade Commission to review the product.

A Facebook spokeswoman said users will receive regular reminders about Nearby Friends, and that the company regularly discusses its products and features with the FTC and other regulators.

With the new feature, Facebook is entering an already crowded space occupied by the likes of casual dating app Tinder and social check-in service Foursquare. Radar, a smartphone app released last year, tells users where their Facebook friends are. Cloak, on the other hand, uses Foursquare and Instagram to locate friends – and help people avoid them.

Rival social network Twitter in December tested a feature that allowed users to see tweets from nearby, whether or not the user followed the tweeter.

Facebook briefly tested a feature similar to Nearby Friends in June 2012, but quickly stopped after news reports of the test surfaced. At the time, Facebook said the effort was an experiment.

This time, Facebook is hoping to do better by leveraging its more than one billion users. Nearby Friends grew out of Facebook’s 2012 acquisition of mobile app Glancee.

Because Facebook users tend to be “friends” with co-workers and family members, Vaccari didn’t want users blasted with notifications every time someone arrived at home or the office. Vaccari’s team developed algorithms so that Facebook could learn about its users’ relationships and limit notifications.

Vaccari said his team also figured out how to track users’ locations without draining the battery. “There’s no extra battery drain,” he said.

The notices won’t disclose a user’s precise location, only their neighborhood. Users can then choose to share their exact location with individual friends who are nearby. Vaccari says that feature comes in handy when meeting people in crowded places, like a concert or parade.

Vaccari said Facebook deliberated about whether to show friends’ locations on a map, but decided against it because some users might have viewed it as an invasion of privacy.

Facebook employees have been testing the app in recent months, and Vaccari said it’s already had some serendipitous outcomes. On one occasion, two employees arrived at the San Francisco airport at the same time from different parts of the world. They learned from Nearby Friends that they were both at the airport and the shared a cab home, saving money.

On another occasion, two Facebook employees learned they were vacationing at the same Lake Tahoe resort, and skied together.

Vaccari said the new feature could help Facebook users develop new relationships. He said he developed Glancee because he found himself in new places where he knew few people. He “fell in love with the problem” of trying to meet new friends, he said.