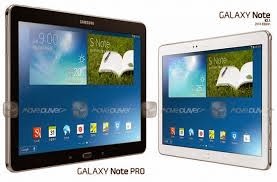 It was make known in the recently held Consumer Electronic show in January. The Company is also providing a free cover valued at Rs. 3,799 and approx $68(USD).

It has 12.2 inch exceptional LCD screen with 2560X1600p resolution and with S pen stylus. It also has Android 4.4 OS and at rear is an 8MP camera with LED flash, and also 2MP front camera. With 9,500 MAH battery its backup will be good i suppose. Galaxy Note pro has 2 color variants black and white with leather finish .

Apple is also working on the professionally grade gadget called iPad pro and will replace Macbook Pro but the release date is not confirmed as of now i think it should be around October this year.

Source- The Times of India