Intel announced the Series 730 solid state drive a few days before, targetted specifically at gamers and content creators. It is launched in two capacities – 240GB and 480GB. Sporting a silver finish, it’s got a Terminator-like skull on the top panel as well, which we find to be simultaneously cool and ominous. Intel uses an eight-channel SSD controller (Intel PC29AS21CA0), 20nm IMFT NAND chips and 1GB of DDR3-1600 cache. The Series 730 SSDs will have the controller overclocked by 50 per cent taking the speed from 400MHz to 600MHz!In order to reduce the read latencies, Intel has also overclocked the NAND by 20 per cent. Making it available in capacities of either 240GB or 480GB, the Intel 730 Series SSD is, as you probably expected, of the 2.5-inch variety, and is also 7mm thick. It also consumes up to 5.5 watts of power when active and as little as 1.3 watts when sitting idle. As for data transfer rates, the Intel 730 Series SSD’s read time hits a maximum of 550MB per second, while its write time tops out at 470MB per tick.  With the 240GB version of the series 730 SSD, you get sequential read speeds of 550MB/s and sequential write speeds of up to 270MB/s. Random 4K read/writes are in the vicinity of 86,000/56,000 IOPs respectively. You can perform up to 50GB writes/day on this drive.  The 480GB Intel Series 730 drive gives sequential read speed of 550MB/s and a sequential write speed of 470MB/s. Random 4K read and writes are expected to give 89,000 and 74,000 IOPs respectively. Endurance on this drive is up to 71GB of writes per day.
Although the sequential speeds are competitive with most consumer class drives, it is the endurance of these drives and Intel’s promise of a 5-year warranty. You can purchase the 240GB Intel 730 Series SSD for $249, while the 480GB version run you $489. The drives will begin shipping on March 18, roughly three weeks from now.                       Intel announces series 730 SSD’s priced at $24. 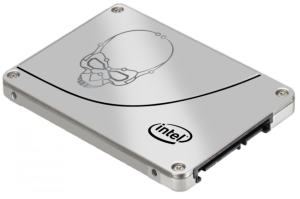