Hybrid rockets have been around for many decades.  Some quite large development programs have come and gone in efforts to overcome practical problems associated with what should ideally be a simple, inexpensive, safe, and controllable rocket motor.  More recent work has produced variations that have the promise to overcome many of the historical problems.
A rocket motor is a device that encloses a high-energy exothermic chemical reaction in a chamber with an exit orifice.  The hot expanding gas (‘efflux’) exiting the orifice (‘nozzle’) provides thrust and thereby momentum to the vehicle containing the rocket.  In order to maintain a steady thrust the chemical reaction has to be energetic enough to maintain a high pressure inside the combustion chamber (‘chamber pressure’) while there is a continuous pressure-loss from the nozzle.  The energies required to perform this feat are enormous.  This is why many early tests of various rocket types result in spectacular explosions and even proven types will occasionally experience a malfunction that results in events that can be devastating.
In theory, rocket motors are the simplest of devices as they have no requirement to convert heat into mechanical motion, as in the case of a piston or turbine engine.  What could be simpler than burning some stuff in a tube and letting the gas out?  In practice, the devil is in the detail and the end result is that rocket motors are very complex, difficult to understand, and hard to predict.  What starts out as a simple idea ends up as a very complex engineering challenge.
The performance of a rocket motor is measured by a term known as Specific Impulse (Isp).  This describes the thrust produced for the weight of propellants consumed and is measured in seconds.   When rocket motor performance is discussed, the Specific Impulse is the term most used and it provides a ready means of comparison of rocket motor performance.
In order to understand the Hybrid, it is necessary to understand rockets in general. There are four main types of rocket motors; each one is now briefly described to establish a basic understanding.
Bi-Propellant Liquid-Fueled Rocket Engines

Liquid Rocket Engine diagram (Credits: NASA)
These are the most complex and highest performance of all rocket motors.  Well known examples are the WW2 V2, Saturn V, and the Space Shuttle main engines.  Two liquid components are pumped or pressure-fed into a combustion chamber and ignited.  While oxygen is the only element that can properly be involved in combustion there are other elements (such as Fluorine) that will support exothermic reactions of sufficient vigour to be of use in rocket motors.  However, the vast majority of these engines use liquid oxygen or some other oxygen-rich compound to burn hydrogen or some other hydro-carbon fuel.  The chemical possibilities are almost endless and there is an extensive history of research and experimentation to find the ideal fuel combination.  The best written history of all of this work is  Ignition! an informal history of liquid rocket propellants by John D Clark  This book should be required reading for all those embarking on rocket motor design as it recounts all of the things have gone badly in the past, thus allowing the reader to avoid previous errors.
Bipropellant liquid engines are the Formula One engines in the field of rocketry, with the highest performance and the greatest complexity.  The combustion components are carried as liquids to reduce volume.  The most common oxidizer used is liquid oxygen which has to be kept very cold (‘cryogenic’) and has to be pumped or pressure-fed into the combustion chamber.  Liquid oxygen is highly reactive and will burn almost any metal and just about everything else, so its handling requires great care and expertise.  Its use tends to be reserved for very big powerful rockets and is rarely found in the amateur rocket world.
Fuels range from kerosene to liquid hydrogen.  The Space Shuttle employed liquid hydrogen for its excellent power-to-mass ratio and fierce combustion characteristics, but most modern liquid-fueled rockets don’t use liquid hydrogen because of the difficulties of storing and cooling it.
These engines, (for some reason the rocket community refers to bi-propellant rockets as ‘engines’ while other types are generally referred to as ‘motors’), are extremely energetic, run at very high chamber-pressures and temperatures, and require very complex cooling, pumping, and storage technologies.  They are very expensive and take a lot of time to prepare for launch.
Mono-propellant Rocket Motors
While monopropellant motors are commonly used in satellites for positioning thrusters, they are rarely used for launch propulsion nowadays.  These motors have had quite a successful history.  A monopropellant is a compound that, when catalyzed, breaks down and recombines into new compounds and releases energy as this process occurs.  Hydrogen Peroxide and Nitrous Oxide are among a variety of compounds that can be used in this way.  The compound is fed into a reaction chamber across a catalyst (often heated) and the resulting reaction produces hot gases that provide thrust.

Model of a basic mono propellant rocket using inert gas for pressurization.
The British launch vehicle Black Knight and the one-time land-speed record holder The Blue Flame both used highly concentrated Hydrogen Peroxide (‘HTHP’, or ‘High-Test Hydrogen Peroxide) successfully.  The specific impulse of these motors is relatively low and they are rarely used these days.  By their very nature, monopropellants are highly reactive and should be treated as explosives.
Solid Rocket Motors
These are most common and ubiquitous type of rocket motor. The earliest rockets, dating back to the 12th century in China, were of this type.  Most military rockets, from Rocket Propelled Grenades, to Anti-Aircraft Missiles use solid rocket motor technology.

The simple light-and-retire rocket used on celebratory occasions, such as July 4th in the USA, are simple chemical rockets.
The contents of a solid rocket are generally referred to as the ‘fuel grain’ and its rate and physical pattern of combustion is referred to as ‘Regression’.  These are important terms that will be used in the discussion of Hybrid Rockets. 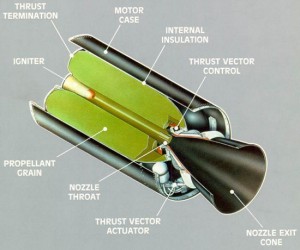 Solid rocket diagram (Credits: Aerospaceweb.org).
In a solid rocket fuel grain, all the components required for vigorous combustion are mixed together into one substance.  There will be an oxidizer (usually a salt such as ammonium percolate or potassium nitrate), a fuel /binder (charcoal, HTPB (Hydroxyl Terminated Polybutadiene) or some other solid hydrocarbon and an accelerant (sulphur), powdered aluminium, or other easily oxidized metal).  When lit, the fuel grain will burn energetically, releasing a large volume of hot gases that are used to provide thrust.
The more sophisticated solid rockets are used as launch boosters on various vehicles including the Space Shuttle, Delta IV, Atlas V,  Ariane 5, and in intercontinental ballistic missiles such as Minute Man and Polaris as well as in many smaller munitions.
Specific impulses from solid rockets are not as high as liquid fueled rockets, but ease of use, short preparation time, and relative simplicity of construction make them the rocket of choice for the widest variety of applications.
High-end solid rockets have a hollow fuel-grain (this hollow is known as a ‘port’) that burns radially. There can be more than one port. The fuel grain can have slightly differing mixtures in different layers of the fuel grain, to allow for a variety of thrust variations and to compensate for the change in geometry of the combustion space as propellant is consumed.

Casting the fuel grain port in different configurations can yield different burn characteristics. Star configurations tend to be popular for a relatively even burn.
The mixing and preparation of large fuel grains is difficult, highly technical, and dangerous.  A solid rocket fuel is, by definition, an explosive. For optimum performance and reliability, the fuel grain mixture must be composed of very fine particles very evenly mixed.  During the mixing and casting process, the mixtures are very unstable and dangerous.  Massive explosions have occurred during manufacture of solid rocket fuel grains.
What started out as the simplest of rocket technologies, has become complex and dangerous.  (This increase in complexity seems to be a constant phenomenon with all types of rockets).
The biggest drawback of solid rockets for manned use is that they can’t be controlled or switched off once they are lit.  Aborts are impossible after ignition.
Hybrid Rocket Motors
As the name implies, ‘Hybrids’ are a cross between other types of rocket motor, in particular, liquid fueled rockets and solid fuel rockets.  They were conceived to overcome the complexities of liquid bi-propellant engines and the lack of controllability of solid rocket motors.
As with the other types of rocket, the idea is very simple, and the execution of the technology has proven to be quite difficult.  Research and development goes back many decades with many dead-ends along the way.  Large institutions such as NASA, large companies such as ATK Launch Systems Group, Aerojet-Rocketdyne and many others, universities, smaller companies, and many amateurs have all done significant work on these motors.

Configuration of a basic hybrid rocket (Credits: Jonny Dyer).
The basic idea is to inject a liquid oxidizer into a fuel grain that consists only of fuel, and that cannot sustain combustion on its own.  The motor is controlled (throttled up and down or shut off) by controlling the flow of liquid oxidizer into the combustion chamber.  Typically the combustion chamber is a long cylinder lined with a fuel composed of hydrocarbons (HTPB, kerosene, plastics of various types, amongst many other possibilities).
The oxidizer is admitted through a small orifice (Injector) at the input end, an igniter (pyrotechnic or electrical) is used to start the burn, and the oxidizer consumes the surface of the fuel grain.  In the case of paraffin or hydro-carbon-wick fuel grains, the fuel evaporates into the center of the chamber and is burnt there.  The vast majority of hybrid rockets have been used in amateur rocketry and are very popular amongst enthusiasts.
Share on Twitter Share on Facebook Share on LinkedIn Share on WhatsApp