After spate of leaks and rumours, HTC’s new flagship smartphone ‘HTC One (M8)’ has finally gone official. The smartphone sports metal unibody and comes with features such as Smart Sensor Hub, Motion Launch and improved HTC BoomSound. The HTC One M8 also has the much-hyped dual-camera set up.

“In 2013 we introduced the best smartphone in the world, but we never stopped challenging ourselves and the status quo in this category. As pioneers in mobile innovation, we continue to design and build devices that will dazzle, inspire and transform the smartphone industry. Today I’m proud to launch the most stunning, intuitive and advanced handset that the industry has seen to date, the new HTC One (M8),” says Peter Chou, CEO, HTC in a release.

The HTC One M8 has improved audio features with the new HTC BoomSound. The smartphone has dual frontal stereo speakers with built in amplifiers Sense Voice. HTC says the new flagship delivers about 25% louder than the predecessor HTC One M7. Also read our HTC One Review

The new BlinkFeed is said to be more intuitive and has new SDK that enables developers to integrate their own content, users can more easily find and subscribe to new media sources, in addition to instantly creating custom feeds on any topic.

The phone features an integrated fitness tracking with the preloaded Fitbit app, which is also compatible with BlinkFeed. The Sense TV feature allows users to conversation about the programme online with integrated official Facebook and Twitter streams along with all the latest fan commentary from your social circles.

There’s also a Motion Launch feature, which HTC touts as the “sixth sense”. According to HTC, Motion Launch is capable of detecting position and movement, allowing users to interact with phone without turning on the screen. With a simple swipe users can active device. Auto Answer allows you to answer a call by putting the phone to your ear without touching the screen. HTC also offers Dot View flip covers that display notifications, time and weather updates and the ability to answer calls, without the need to uncover the phone.

The smartphone will be available in 16GB and 32GB storage versions, while the expansion card slot supports microSD memory card for up to 128GB additional storage.

Check out the full specifications of the smartphone here.

The HTC One (M8) will be available globally in Gunmetal Gray, Glacial Silver and will be rolled out in the South Asia region in the coming weeks. According to reports, the smartphone will be available in India in April. 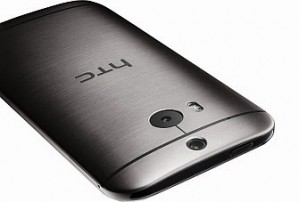