Back in CES earlier this year Sony unveiled “mini” variant of the Xperia Z1, dubbed as the Xperia Z1 Compact, which is now officially launched in India with a price tag of Rs 36,990.

Unlike the many “mini” variants available today, Sony hasn’t compromised on the specs. Instead, it offered a device with top-of-the-line specifications in a compact package. The Sony Xperia Z1 Compact is manufactured by a single aluminium frame with tempered glass on the back and front panels.

The device flaunts a 4.3-inch Triluminos HD (1,280×720 pixels) display with X-Reality engine for mobile. The Sony Xperia Z1 Compact is powered by a 2.2GHz quad-core Qualcomm Snapdragon 800 (MSM8974) processor along with 2GB of RAM, much like the elder sibling, Xperia Z1. It include 16GB of internal storage that can be expanded to up to 64GB using a microSD card. It runs Android 4.3 Jelly Bean out-of-the-box.

The highlight of the Xperia Z1 Compact is again the 20.7-megapixel Exmor RS sensor alongside BIONZ image processor engine and pulsed LED flash, as seen in Xperia Z1. It also includes a 2-megapixel front-facing camera. Connectivity options on the device include Bluetooth, Wi-Fi, GPS/ GLONASS and NFC.

The Xperia Z1 Compact packs a 2300mAh battery with STAMINA mode and is waterproof and dust-proof smartphone, like other high-end Xperia smartphones. 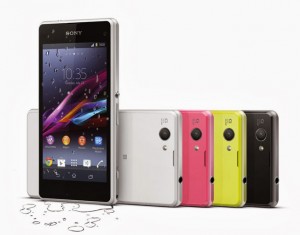