Once a year, Samsung takes some of its best material and slaps it together into a premium flagship model called the Galaxy S. While 2014’s version — the S5 — came a bit earlier in the year than some earlier iterations, we’re no less excited to see it become the star of the show at Mobile World Congress. The new device will ship in April (on stage, Samsung specifically mentioned that it launches on April 11th in 150 markets), although exact pricing and availability are still unknown. It features a refreshed design language, yet anyone who has used a GS phone recently will immediately recognize it as a Samsung flagship.  Despite its familiar design, the GS5 has a few new useful hardware features, including a fingerprint scanner, heart rate sensor, and a toned-down TouchWiz UI on top of Android 4.4 KitKat. Perhaps the biggest surprise of all, however, was that Samsung didn’t overload its prized new smartphone with a heaping dose of new S-branded features. This is a marked departure from the company’s previous strategy of cramming in every software feature under the sun, which leads us to wonder if this is related to Samsung’s recent agreement to dial back the customization it does on Android devices. So what else is new here? Read on for a deeper dive. 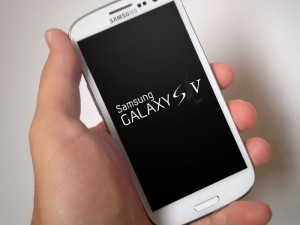 The new Galaxy retains the same 1080p Super AMOLED panel as the GS4; it’s just slightly larger, at 5.1 inches. With this in mind, it shouldn’t come as a surprise that the viewing experience is pretty much the same as its predecessor. Additionally, the Galaxy S5 comes with a swappable back cover, microSD slot and removable 2,800mAh battery, which has a higher capacity than last year’s model. It’s also IP67-certified, which adds an element of water and dust resistance never before enjoyed by Galaxy S users (unless you count the GS4 Active, that is). As a result, the micro-USB 3.0 port at the bottom is protected by a tab that keeps water from getting inside.

Samsung says the back of the Galaxy S5 is “leather-like,” which basically means it’s a fancy-looking polycarbonate build. While the company already uses similar design language for the Galaxy Note 3 and Note 10.1 2014 edition, the look and feel is slightly different; it’s not quite as soft as the new Notes, and its small dimples actually remind us of the original Nexus 7. Though the sides have a metallic finish, company reps confirmed they’re actually made from a blend of polycarbonate and glass fiber. Still, we’re more confident of the durability here than we were with many of Samsung’s previous Galaxy phones.
One of the biggest talking points for the GS5 is that new fingerprint scanner. It’s easy to see this as a response to Apple’s Touch ID implementation in the iPhone 5s, and while it’s hard to say if that was the primary motivation for the new feature, Apple’s not the only manufacturer to have integrated a fingerprint scanner, and we’re sure it won’t be the last. In this case, Samsung’s scanner, which works by swiping your finger down over the home button, has a few handy use cases. In addition to the obligatory phone unlock option, it also lets you fingerprint-protect a private data locker on your phone, in case you have confidential information you don’t want getting out there. Samsung also announced a partnership with PayPal which allows you to make online payments using the fingerprint method. In our limited time with the GS5, we noticed that the phone picked up the fingerprint of users most of the time, as long as they did it slowly enough — if you’re in a swiping hurry, your chance of success will likely drop. Unfortunately, we’re still waiting to hear back on exactly how Samsung will implement security and privacy concerns with the scanner, so we’ll update you as soon as we know more details.
The other major new hardware feature is the heart rate sensor, which is built into the same rear module as the LED flash. It works in conjunction with S-Health 3.0, which acts as a personal life coach of sorts. To monitor your pulse, hold your finger up to the sensor and leave it there while the phone does the rest of the work. As you continue to do this more often, S-Health remembers your history and even goes through the effort of graphing it and offering up other relevant information. It also acts as a pedometer and food monitor. Samsung plans to offer an open SDK for developers to incorporate the tech into their own apps.  Of course, Samsung also put some emphasis on the camera as well. In this case, the GS5 comes with a 16-megapixel sensor that features UHD recording capability and real-time HDR (both photos and video) and a couple new modes that we’re excited to review. First, Samsung is introducing a selective focus feature that’s much like Nokia’s Refocus Lens, in which you can change the depth of field on an image after it’s taken. Additionally, it also has “Shot & More,” which is essentially your standard suite of best photo, eraser and drama; the GS4 had the ability to do these modes, but the difficulty was in the fact that you had to know exactly which mode you wanted to use before taking the shot, whereas now you’ll be able to sort those details out after the shot is taken so you’re not wasting extra time. Lastly, there’s also a 2.0-megapixel camera on the front.
The design philosophy behind this version of the Galaxy S involves a modern, glam look, and it even shows in the user interface. It’s still very much a TouchWiz device, but it has a much different appearance than previous versions. It seems to be less in-your-face (again, a likely consequence of Google’s intervention) with fewer tabs and menus. The Magazine is still around, but it’s now accessible by swiping from left to right, not down to up.
The rest of the phone’s stats won’t come as any shock. The GS5 offers a top-of-the-line 2.5GHz Snapdragon 800 processor with 2GB of RAM, an IR remote, NFC, Bluetooth 4.0 BLE/ANT+, Cat 4 LTE (up to 150Mbps down/50Mbps up) and your choice of 16GB or 32GB of internal storage; oddly, 64GB doesn’t appear to be an option, though you can add up to 128GB via a microSD card if needed. All told, it’s very much a run-of-the-mill Galaxy S flagship, but there are enough new hardware features and software tweaks to make it feel fresh.