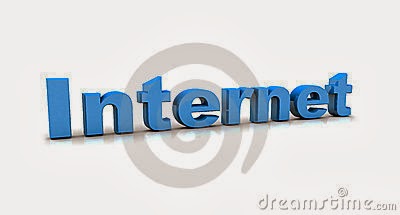 The greatest thing about the Internet is that nobody really owns it.
It is a global collection of networks, both big and small connected together in many different ways to form the single entity that we know as the Internet.

the name ‘Internet’ comes from this idea of interconnected networks.

Since its beginning in 1969, the Internet has grown from four host computer systems to tens of millions.

However, just because nobody owns the Internet, it doesn’t mean it is not monitored and maintained in different ways.

The Internet Society, a non-profit group established in 1992, oversees the formation of the policies and protocols that define how we use and interact with the Internet.

How computer connects to internet.

Every computer that is connected to the Internet is part of a network, even the one in your home.

The Internet is simply a network of networks.
Most large communications companies have their own dedicated backbones connecting various regions.
In each region, the company has a Point of Presence (POP).

The POP is a place for local users to access the company’s network, often through a local phone number or dedicated line.

The amazing thing here is that there is no overall controlling network.
Instead, there are several high-level networks connecting to each other through Network Access Points or NAPs.

Imagine that Company A is a large ISP.
In each major city, Company A has a POP. the POP in each city is a rack full of modems that the ISP’s customers dial into. Company A use fiber optic (a cable) to communicate.

Imagine that Company B is a corporate ISP. Company B builds large buildings in major cities and corporations locate their Internet server machines in these buildings. Company B is such a large company that it runs its own fiber optic lines between its buildings
so that they are all interconnected.

In the real Internet, dozens of large Internet providers interconnect at NAPs in various cities, and trillions of bytes of data flow between the individual networks at these points.
The Internet is a collection of huge corporate networks that agree to all intercommunicate with each other at the NAPs.

In this way, every computer on the Internet connects to every other.

The Function of an Internet Router (Message passing)

All of the networks rely on NAPs, backbones and routers to talk to each other.

What is incredible about this process is that a message can leave one computer and travel halfway across the world through several different networks and arrive at another computer in a fraction of a second!

The routers determine where to send information from one computer to another.

Routers are specialized computers that send your messages and those of every other Internet user speeding to their destinations along thousands of pathways.

A router has two separate, but related, jobs:

* It ensures that information doesn’t go where it’s not needed.

* It makes sure that information does make it to the intended destination.

In performing these two jobs, a router is extremely useful in dealing with two separate computer networks.
It joins the two networks, passing information from one to the other.

It also protects the networks from one another, preventing the traffic on one from unnecessarily spilling over to the other.

Regardless of how many networks are attached, the basic operation and function of the router remains the same.

Since the Internet is one huge network made up of tens of thousands of smaller networks, its use of routers is an absolute necessity.

The National Science Foundation(NSF) created the first high-speed backbone in 1987. Called NSFNET, it was a T1 line that connected 170 smaller networks together and operated at 1.544 Mbps (million bits per second). IBM, MCI and Merit worked with NSF to create the backbone and developed a T3 (45 Mbps) backbone the following year.

Today there are many companies that operate their own high-capacity backbones, and all of them interconnect at various NAPs around the world.

In this way, everyone on the Internet, no matter where they are and what company they use, is able to talk to everyone else on the planet.
The entire Internet is a gigantic, sprawling agreement between companies to intercommunicate freely.

Every machine on the Internet has a unique identifying number, called an IP Address.

The IP stands for Internet Protocol, which is the language that computers use to communicate over the Internet.
A protocol is the pre-defined way that someone who wants to use a service talks with that service.
The “someone” could be a person, but more often it is a computer program like a Web browser.

But computers communicate in binaryform.

the four numbers in an IP address are called octets, because they each have eight positions when viewed in binary form.

If you add all the positions together, you get 32, which is why IP addresses are considered 32-bit numbers.

Since each of the eight positions can have two different states (1 or zero), the total number of possible combinations per octet is 28 or 256. So each octet can contain any value between zero and 255.
Combine the four octets and you get 232 or a possible 4,294,967,296 unique values!
Out of the almost 4.3 billion possible combinations, certain values are restricted from use as typical IP addresses.
For example, the IP address 0.0.0.0 is reserved for the default network and the address 255.255.255.255 is used for broadcasts.

The octets serve a purpose other than simply separating the numbers.
They are used to create classes of IP addresses that can be assigned to a particular business, government or other entity based on size and need.

The octets are split into two sections: Net and Host.
The Net section always contains the first octet. It is used to identify the network that a computer belongs to.

Host (sometimes referred to as Node) identifies the actual computer on the network.
The Host section always contains the last octet.
There are five IP classes plus certain special addresses.

Its very complex to use and remember IP addresses of the computer you wanted to establish a link with.

For example, a typical IP address might be 216.27.20.164.
This was fine when there were only a few hosts out there, but it became unwieldy as more and more systems came online.

The first solution to the problem was a simple text file maintained by the Network Information Center that mapped names to IP addresses. Soon this text file became so large it was too cumbersome to manage.

In 1983, the University of Wisconsin created the Domain Name System (DNS), which maps text names to IP addresses automatically.

This way you only need to remember www.facebook .com, Instead of How Facebook .com’s IP address.

When you use the Web or send an e-mail message, you use a domain name to do it.
For example, the Uniform Resource Locator (URL) ” https:// www. facebook. com” contains the domain name facebook. com.

Every time you use a domain name, you use the Internet’s DNS servers to translate the human-readable domain name into the machine-readable IP address.

DNS servers accept requests from programs and other name servers to convert domain names into IP addresses.
When a request comes in, the DNS server can do one of four things with it:

2. It can contact another DNS server and try to find the IP address for the name requested. It may have to do this multiple times.

4. It can return an error message because the requested domain name is invalid or does not exist.

How DNS, and URL works? (EXMPLE)

et’s say that you type the URL
www. facebook .com into your browser.

One of the keys to making this work is redundancy. There are multiple DNS servers at every level, so that if one fails, there are others to handle the requests.
The other key is caching.
Once a DNS server resolves a request, it caches the IP address it receives.
Once it has made a request to a root DNS server for any .COM domain, it knows the IP address for a DNS server handling the .COM domain, so it doesn’t have to bug the root DNS servers again for that information.
DNS servers can do this for every request, and this caching helps to keep things from bogging down.

Even though it is totally invisible, DNS servers handle billions of requests every day and they are essential to the Internet’s smooth functioning.

The fact that this distributed database works so well and so invisibly day in and day out is a testimony to the design.

nternet servers make the Internet possible.
All of the machines on the Internet are either servers or clients.

The machines that provide services to other machines are servers.
And the machines that are used to connect to those services are clients.
There are Web servers, e-mail servers, FTP servers and so on serving the needs of Internet users all over the world.

When you connect to www. facebook .com to read a page, you are a user sitting at a client’s machine.
You are accessing the facebook Web server.
The server machine finds the page you requested and sends it to you.
Clients that come to a server machine do so with a specific intent, so clients direct their requests to a specific software server running on the server machine.
For example, if you are running a Web browser on your machine, it will want to talk to the Web server on the server machine, not the e-mail server.
A server has a static IP address that does not change very often.
A home machine that is dialing up through a modem, on the other hand, typically has an IP address assigned by the ISP every time you dial in.

That IP address is unique for your session — it may be different the next time you dial in.
This way, an ISP only needs one IP address for each modem it supports, rather than one for each customer.

Clients connect to a service at a specific IP address and on a specific port number.
Once a client has connected to a service on a particular port, it accesses the service using a specific protocol. Protocols are often text and simply describe how the client and server will have their conversation. Every Web server on the Internet conforms to the hypertext transfer protocol (HTTP).