HP has finally released its two Android-based voice-calling devices, the Slate6 VoiceTab and HP Slate7 VoiceTab for the Indian market. The HP Slate6 VoiceTab phablet has been priced at Rs. 22,990, and will be available online and in stores from Friday. 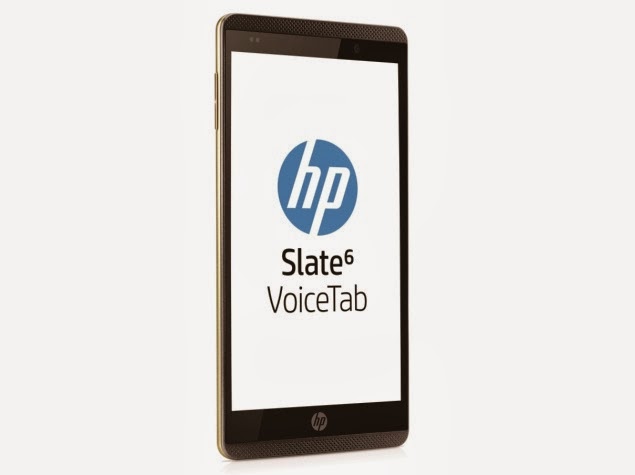 Earlier in January, HP announced the Slate6 VoiceTab phablet and Slate7 VoiceTab tablet for the Indian market and revealed that the devices would be available in February.
The HP Slate6 VoiceTab phablet comes with a 6-inch IPS LCD display with 720×1280 pixel resolution and is powered by a Marvell PXA1088 SoC with a 1.2GHz quad-core processor alongside 1GB of RAM. It comes with a 16GB inbuilt storage, which is further expandable up to 32GB. The HP Slate6 runs Android 4.2.2 Jelly Bean and comes with dimensions of 165×82.6×8.98mm and weighs 160 grams.
The HP Slate6 VoiceTab sports a 5-megapixel rear camera and a 2-megapixel front camera with HD video recording support. The Slate6 is powered by a 3000mAh battery, which is rated at 10 hours of talk time, and 7 hours of video playback time by HP.  The HP Slate6 VoiceTab supports dual-SIM functionality (one regular, one Micro-SIM), with both SIM cards slots supporting 3G connectivity.
Connectivity options include  Bluetooth 3.0 EDR, 802.11b/g/n Wi-Fi and GPS. It features comes with a 3.5mm audio jack, a Micro-USB port, and Stereo FM radio. It also features dual front-facing speakers above and below the display. The HP Slate6 also comes with a G-sensor, gyro, e-compass, ambient light sensor, and proximity sensor.
HP is also offering 3 months of unlimited downloads on its HP Connected Music service to Slate6 VoiceTab owners.
Share on Twitter Share on Facebook Share on LinkedIn Share on WhatsApp