A cameo appearance by Dwayne ‘The Rock’ Johnson was part of Fortnite’s big end-of-season extravaganza, dubbed “The End.” The season came to a close with the island being turned upside down to show a whole new map. The Fortnite Chapter 3 Season 1 will be launched on the 7th of December, 2021, and will be available for download. The Battle Pass will be made accessible as soon as possible after that. The latest combat pass came to a conclusion just a few days ago.

As Fortnite Chapter 3 approaches, Epic has pulled the game offline for server maintenance in order to ensure that everything is in working order before to the launch of Chapter 3. Despite the fact that there is no official downtime timetable, earlier sources indicate that the game would be unavailable until at least December 6. Fortnite’s next chapter will include big changes, new islands, mechanics, and a Spider-Man skin, among other things.

With a little bit of grassland on the right side of the map and much less desert at the bottom, the new map is a welcome change. It should come as no surprise that the map is covered in snow as Christmas approaches and the winter season begins.

Numerous fans are hopeful that the game’s new, delayed release date would result in Epic Games adding more features this time around, therefore making Season 3 one of the most interesting new times in the game’s historical timeline.

Battle Stars are a relatively new feature in Chapter 3, Season 1, and they are a terrific method for gamers to obtain Battle Pass prizes. The Foundation, Gears of War, and Spider-Man skins will be included in the Chapter 3 Battle Pass for the Season 1 of the game. There will be more to come in the near future.

Epic Games may include throwing axes to Fortnite Battle Royale as a result of clues unearthed by diehard Fortnite fans. The twist, however, is that the throwing axes may be grabbed by enemy players, making it a potentially dangerous weapon to employ in battle.

A revamped version of the FlintKnock Pistol is also in the works, according to Epic Games, and will have enhanced stats as well as additional features. This is on top of the addition of a new saddle item, which will allow players to mount and ride animals.

Spider-Man will now be playable in Fortnite Chapter 3 in a variety of different ways, according to the latest teaser for the video game. Additionally, this teaser showed that at least two additional Spider-Man skins would be available in the game. This includes the Symbiote Black Suit Spider-Man and the Future Foundation Spider-Man skins, with the former being the more popular of the two.

Following an unexpected black hole occurrence in 2018, Fortnite’s second chapter was re-released in 2019. The chapter ran eight seasons and featured anything from an extraterrestrial invasion to a Marvel superhero takeover, among other things. 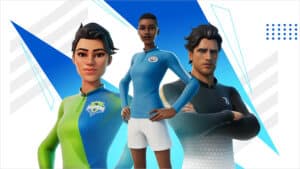