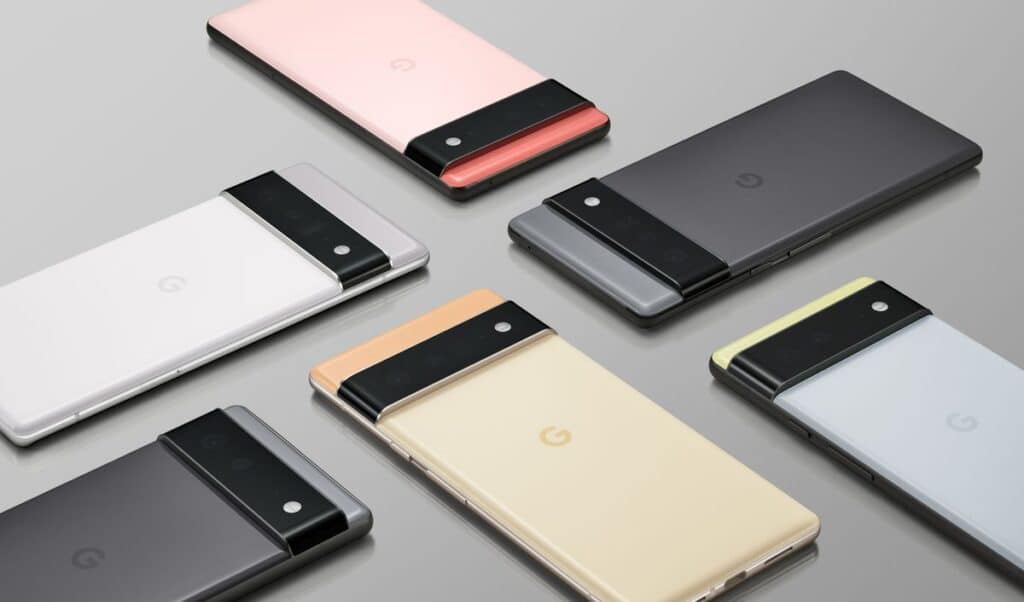 Google provided a glimpse of the forthcoming Pixel 6 and Pixel 6 Pro smartphones, as well as some data on the processor (Google Tensor), on Monday, seemingly out of nowhere. Also confirmed by the business is that the Pixel 6 series will be available for purchase starting in the fall of 2017.

An all-new proprietary chipset named Google Tensor will be used to power the Pixel 6 and Pixel 6 Pro devices, which will be released in the coming months.

According to the search engine giant, the new microprocessor developed by Google is just for Pixel smartphones.

Pixel 6 and Pixel 6 Pro, as previously revealed in a number of leaks, feature a design that is a change from the previous simple design that we may have grown to like in recent years.

The back design, on the other hand, is forceful and provides a glimpse into what the business has in store for its consumers.

The Pixel 6 and Pixel 6 Pro will be available in three color options, according to Google.

However, while the back panels of both phones appear to be comparable in appearance, Google notes, “Pro tip (ha!) – the Pixel phones that have extra space above the camera bar equal the Pixel6 Pro.”

With the most important camera specifications revealed, Google announced that the Pixel 6 Pro will have triple cameras on the back, including a telephoto lens with 4x optical zoom, which would be a first for the Pixel line of smartphones.

A telephoto sensor is not included in the Pixel 6, which is expected to be the more affordable of the two smartphones on the market. “We’re leaving telephoto to the professionals, you could say,” Google further states.

Google Pixel smartphones will be the first to have an SoC (System-on-Chip) created by Google, known as Google Tensor, and it will be available for purchase starting in November.

According to the firm, the new SoC’s most notable feature is its ability to directly handle Google’s most powerful artificial intelligence (AI) and machine learning (ML) algorithms on the phone’s display.

So excited to share our new custom Google Tensor chip, which has been 4 yrs in the making (📎 for scale)! Tensor builds off of our 2 decades of computing experience and it’s our biggest innovation in Pixel to date. Will be on Pixel 6 + Pixel 6 Pro in fall. https://t.co/N95X6gFxLf pic.twitter.com/wHiEJRHJwy

Cameras, speech recognition, and other departments, according to Google, will be some of the areas where the difference will be evident the most.

On its Google Pixel Instagram account, Google has announced that Pixel phone enthusiasts will be able to see what the cameras on the Pixel 6 series are capable of doing.

In addition, the Material You Design is the next important item to confirm.

While it was already obvious that the Pixel 6 phones will ship with the new Android 12 operating system and Material You design, we now get a glimpse of what it might look like.

According to Google, the initial look is seamless, with the color UI, camera, and on-screen UI all functioning in sync with one another.

When it comes to the Android 12 home screen, it appears that the icon colors, tabs, and other elements will take color cues from the wallpaper that has been selected, which is amazing and looks nice.

The Pixel 6 will also have significant advances in speech recognition, according to Google. According to a tweet from the firm, “Speech recognition is another core technology where you will witness a tremendous improvement with Pixel6.”

In addition to voice commands, Translation, Captioning, and Dictation, Google promises that the new custom chip will enable the firm to make significant advancements in these areas.

Additionally, Google spoke about hardware security, stating that the Pixel 6 and Pixel 6 Pro are constructed with the highest number of layers of hardware protection available in any mobile device today.

Google also confirmed that the Pixel 6 and Pixel 6 Pro will be on sale this autumn, as previously announced.

This might indicate that the iPhone 13 series and the Pixel 6 series will be put against each other in terms of camera performance.