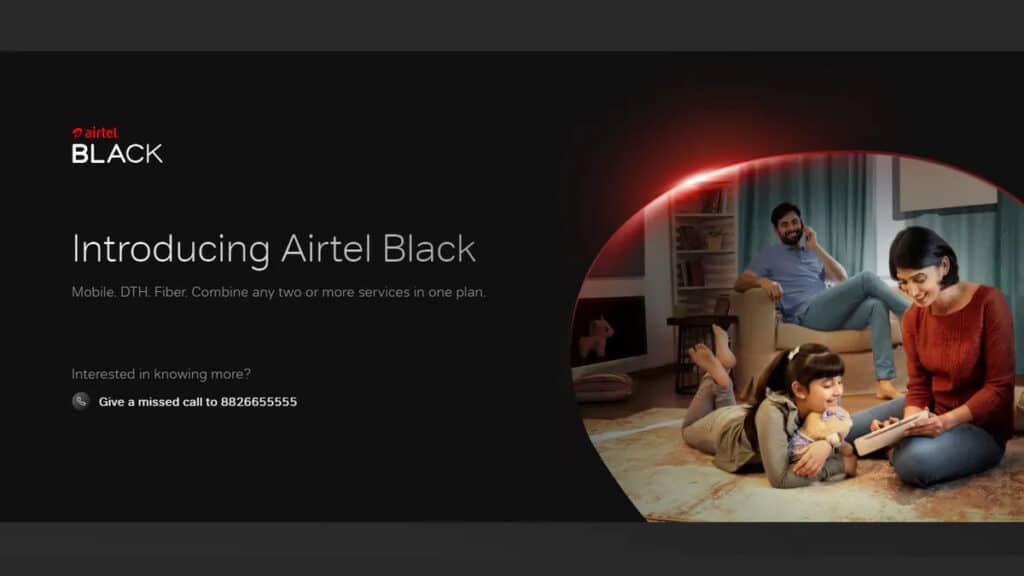 Bharti Airtel has announced the launch of its new Airtel Black subscription service across the country. Users of the Airtel Black plans will be able to get a single, consolidated bill for a variety of Airtel services, including Airtel Xstream fiber broadband, Airtel direct to home (DTH) service, and Airtel mobile services.

Depending on whatever Airtel Black plan you choose, you will be able to construct customized plans using any combination of Xstream broadband, mobile, or DTH connection. One Airtel bundled plan was already offered as a trial for Airtel subscribers, thus this is just a rebranding of such products.

Airtel Black plans may be customized to meet your specific needs, or you can choose from a selection of preset plans with monthly rates beginning at Rs 998.

Custom plans allow you to pick between Xstream fiber connections with speeds up to 1Gbps, postpaid mobile connections, and Xstream DTH.

New connections can utilize the Create Airtel Black Plan feature, as can current customers who want to consolidate their existing mobile, internet, and DTH plans into one payment.

The monthly tariff bundle for a single bill that includes all of your internet, postpaid mobile, and DTH services will be determined by the kind of plans you choose to subscribe to for each service. There are several Airtel Xstream internet plans available, starting at Rs 499 and offering speeds of up to 1Gbps as well as unlimited data use.

DTH service recharges start at Rs 153 per month for TV channels, while postpaid cell rates start at Rs 499 per month and go up from there. If you want to sign up for an Airtel Black bespoke plan, you must have at least two services bundled together, and Airtel promises that the first 30-days will be free for any new services that are added afterward.

All Airtel Black plans will feature a free Airtel Xstream Box for DTH services, as well as free installation, as part of the package. This would be extremely beneficial for new consumers who are interested in subscribing to the Xstream DTH service as well.

In addition, the present and suggested Airtel Black plans start at Rs 998 per month. The Airtel Black 998 Plan includes two postpaid mobile connections with 105GB of 4G data and unlimited local and national calls, as well as a DTH connection that includes Rs 350 worth of TV channels in addition to the postpaid connections.

The Airtel Black 1349 Plan provides you with three postpaid cell connections with 210GB of 4G data as well as the Xstream DTH with a Rs 350 TV channel package as part of the overall package.

You receive two postpaid mobile connections with 105GB of data each, as well as the Xstream broadband service, which provides up to 200Mbps speeds and a bundled landline with unlimited local and national calls.

All three services are included in the Airtel Black 2099 Plan, which includes three postpaid mobile connections with a combined 260GB of mobile data, and Xstream DTH connection with a Rs 424 package of TV channels, as well as the Xstream broadband service with up to 200Mbps speeds, and a bundled landline with unlimited local and national calls.

According to Shashwat Sharma, Director – Marketing and Communications at Bharti Airtel, “This directly addresses the demand for ease and peace of mind for our consumers as they manage their lives in the new normal.”

Using an artificial intelligence-driven recommendation system that is tailored to the needs of each individual client, Airtel claims to be able to offer adjustments and tweaks to the Airtel Black plan. With the AI solution that Airtel has implemented, installation and resolution will be prioritized for Airtel Black subscribers as well as for other consumers.

Airtel says that any concerns would be dealt with in a timely manner and that each Airtel Black client will be assigned a dedicated relationship manager. The company claims that all calls to the customer service line would be answered in less than 60 seconds, according to the company.