AMD processors over Intel has made AMD the conqueror of the CPU Industry with a 30% market share in Steam’s hardware survey. According to the recent Steam Survey, AMD currently claims 30% of CPUs market share in the gaming field. It’s the healthiest share that it has had in a long, protracted time, but at the same time, the news isn’t exactly stunning.

AMD is manufacturing several of the top CPUs. AMD’s recent success probably has been greatly influenced by the debut and popularity of the Zen 3 Ryzen 5000 series CPU. The Processor has obtained a faultless result in the review of AMD Ryzen 9 5950X. AMD’s 3 Zen processors were announced in 2020, with a huge influence on our most popular CPUs list like Ryzen 9 5900X and Ryzen 5 5600X. Both chips had issues with supply and were essentially sold out at the beginning of the year. However, the supply has begun to return, and now computers with these specifications will definitely rise.

The poll results indicated that AMD’s CPU market share grew from 29.48% in April to 30.13% in May. The same pattern as in the past months is applied: Steam users have gained popularity for AMD CPUs by around half a percent over 2021. These progressive advantages are now beginning to mount up. Unfortunately, the method in which the Steam Hardware Survey actually collects CPU statistics doesn’t guarantee that it is the most valuable information. In reality, the survey records the number of cores and operative frequencies as independent entities are practically impossible to track models. You can notice patterns in the number of CPU cores in computers, the largest elevation in eight-core processors, but much more than this is a good question. 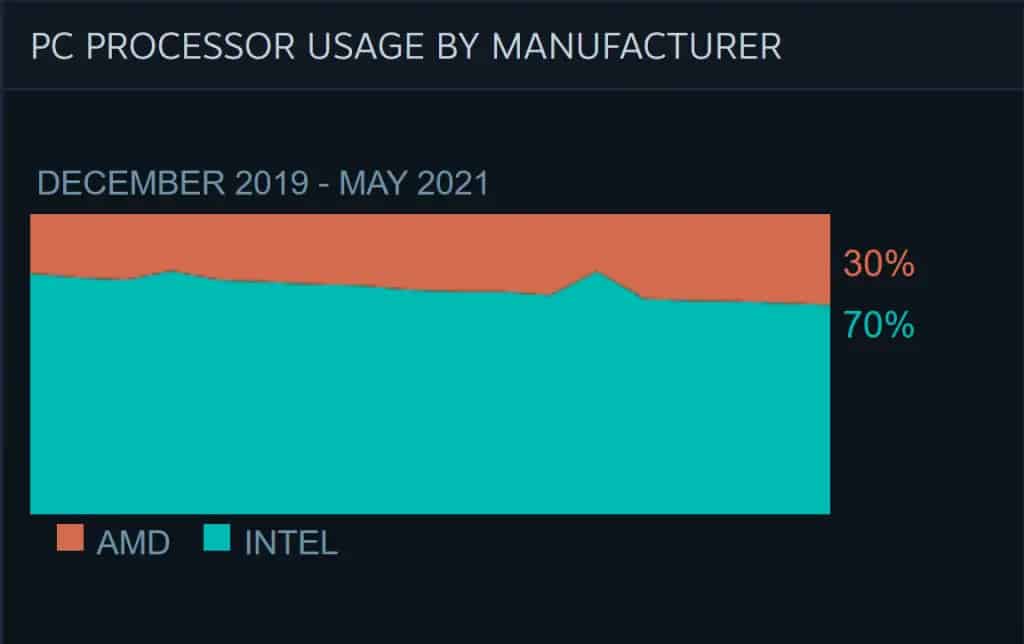 But when it comes to graphic cards, things are a little clearer scenario, in which you see which models people really buy. The largest boost is the Nvidia GeForce RTX 3060, which is also a good intrusion on laptops for the rest of Nvidia’s Ampere GPUs.

The mobile GeForce GTX 1060 is fascinatingly the largest downtick, indicating that many players are upgrading before the previous generation. Because of Ampere’s increasing performance compared with Pascal, this makes sense. As with every steam survey, there are many fascinating statistics, but don’t read too much of it as ever. The overall trends are more important than certain figures.

Here, we are concerned that the latest “ampere” generation has expanded the gaps and that the tag “AMD can not only compete with the NVIDIA.” The green giant ‘plays’ to the requirements of the market and when pushed, covers new models, the last week launch like the GeForce RTX 3080 Ti and RTX 3070 Ti. In terms of quota, NVIDIA has a quota of more than 75 percent in the Steam hardware survey.

Overall, gamers prioritize AMD processors more over legacy Intel processors. The performance lift of AMD in recent years has remarked on history. AMD introduced 7nm processor chips, whereas Intel is still stuck on 14nm technology. It doesn’t affect performance except for power consumption, but it really matters if one has to go with the latest technology. Steam’s hardware survey