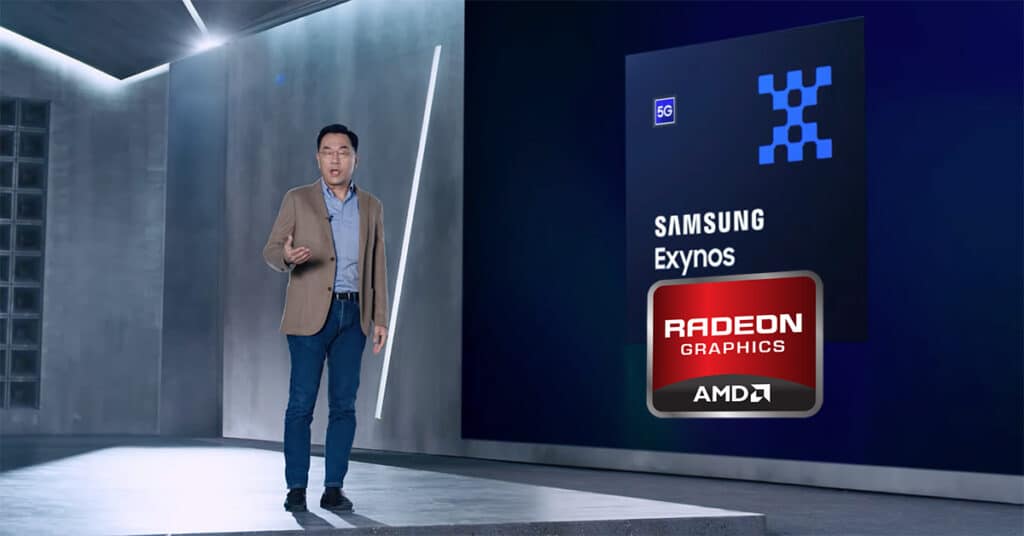 It has been reported that AMD’s mobile Radeon mRDNA 2 graphics is a little bit faster in terms of peak performance than the forthcoming ARM Mali GPU and that its performance is higher than the newest Mali GPU even when exposed to a 30 percent performance loss when throttling is applied. The new SoC will most likely be unveiled in July by Samsung and AMD. In addition, experts have reported that Google has signed a deal with AMD for the development of mRDNA 2.

In recent years, it has become widely known that AMD intends to deliver Radeon graphics to Samsung devices. In addition, AMD CEO Dr. Lisa Su reiterated this point during the company’s just ended Computex 2021 media briefing. While there has been no official announcement of a debut date for the Samsung-AMD Exynos chip to date, it appears that early prototypes have already been placed in the hands of a few beta testers.

A forum post provides some preliminary information about AMD’s mobile RDNA 2 (mRDNA 2) GPU. It appears that, according to the OP (which was translated from Chinese), the AMD mRDNA 2 GPU has comparable or slightly superior peak performance when compared to the next-generation Mali GPU. While the peak performance appears to be similar to the existing Exynos implementation, the AMD mRDNA 2 processor is apparently more efficient when it comes to throttling than the current Exynos implementation.

The performance of the mobile RDNA 2 GPU reduces by around 20% from its peak in the first round of testing, followed by another 10% loss in the second round for a total of 30% drop in performance. However makes it deeply fascinating that, despite a 30 percent reduction in performance owing to throttling, AMD’s mobile Radeon RDNA 2 GPU is still quicker than the most recent Mali GPU, which we presume to be the Mali-G78 in this case.

The rumor of which mRDNA2 is set to be equipped in the next Exynos is overwhelming the competitor chip in peak performance, according to an actual performance test.

Due to the apparent superior performance characteristics of AMD GPUs, it is just a matter of time before Samsung completely abandons the use of NVIDIA GPUs in its Exynos SoCs. Recent reports have stated that the Exynos 5 nm CPU with RDNA 2 graphics bodes well for both laptops and smartphones in terms of performance.

The OP also mentions that Google is exhibiting a lot of interest in AMD’s mobile Radeon IP and that the company has, more than likely, signed a deal with AMD for mRDNA 2 GPU.

There has been no official announcement as to when we will be able to witness the results of the Samsung-AMD collaboration in reality. Ice Universe has recently revealed that plans for a June unveiling have been postponed until July, which means that there’s a considerable chance that even more performance leaks may occur in the lead-up to next month’s presentation as a result of the delay.

Exclusive：Samsung×AMD GPU was originally scheduled to be released in June, but now it has been postponed to July, when we will know the performance of AMD GPU on Exynos and other details. pic.twitter.com/GM6W8l3EKY

It is true that Samsung’s Exynos processors will most certainly be scaled down to accommodate mobile limits, but this could still give Samsung an advantage over the competition. Due to the advancements in GPU technology, it is anticipated that ray tracing and variable rate shading will find their way to mobile devices, although not to the same extent as they do on consoles, PCs, or even laptops.

In fact, many details are still up in the air at this moment, but it’s possible that we won’t have to wait long to understand more about some of them in an official manner. This yet-to-be-named Exynos + AMD chip, which was once expected to be disclosed this month, is now set to be released in July, according to Ice Universe.