Valorant newest Agent is a robot codenamed KAY/O that possesses the ability to inhibit or suppress the powers of its opponents.

It is expected that the new Agent will be released as part of the Valorant Episode 3 update, which will also feature a significant patch for the game.

Due to his Initiator designation, KAY/O will be excellent at pushing his way onto sites and smashing through opponent barriers. One of KAY/O’s powers allows him to throw a special knife that prohibits foes in a short area from utilizing their skills – an effect known as suppressed — preventing them from using their abilities.

His Ultimate includes something similar, but it radiates from his body rather than being contained within it.

When KAY/O uses his Ultimate, he receives a Combat Stim, and if he dies while performing the Ultimate, he will have the opportunity to be revived by a teammate. Valorant is making its way to mobile platforms.

While KAY/O’s suppression effects are the most distinctive aspect of his character, his other two abilities should be equally important. He possesses a flash that can be charged to make it more difficult for enemies to look away from, as well as a grenade that deals massive amounts of damage if the player is in the middle of a cluster of grenades.

It is expected that KAY/O will be made available on the Valorant live servers on June 22nd. To prepare you for his arrival, here’s an overview of the abilities or skills that are included in his package.

Valorant Team officially released the agent KAY/O’s trailer and the reaction of the community were very positive. People were sharing their positive views on the new agent in the comment section.

KAY/O’s Abilities are as follows:

Equip yourself with a suppression blade. Throw a firecracker. The blade attaches to the first surface it comes into contact with, winds up, and paralyzes anyone within a certain radius of the explosion.

Equip yourself with a flash grenade. Toss a grenade. After a short fuse, the flash grenade explodes, blinding anyone who seems to be in its line of sight.
Right-click the flashbang causes it to fire a charged flash, which means it only needs to burn for 1 second, as opposed to left-clicking which causes it to fire a charged flash that needs to burn for 1.6 seconds.

Equip yourself with an explosive fragment. After sticking to the floor for a while, the fragment bursts several times, delivering near-fatal damage to the middle of the battleground with each explosion.

Create an instantaneous excess of polarised Radianite energy, which strengthens KAY/O and causes huge energy pulses to emit from his location. Enemies who are hit by these pulses are temporarily suppressed for a brief time.

Whenever KAY/O is overloaded, he acquires Combat Stimulation.

KAY/O is pulled down and enters a destabilized state if he gets killed when overloaded, allowing allies to stabilize his core and restore him to max health 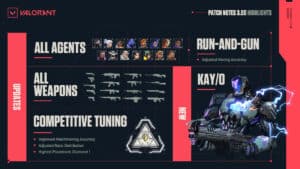