The AMD RX 6700 XT will be available on March 18, according to AMD. The new GPU should make the RDNA 2 architecture more accessible, but at $479, it’s not cheap.

If AMD’s newly published output numbers are to be believed, it also sits mighty tight in terms of performance. The RX 6700 series is expected to have two different cards, but recent rumors suggest that the lower-spec RX 6700 will arrive much later than March. AMD has so far made no mention of it.

The Radeon Technologies Group’s new graphics cards, the RX 6700 XT, would be a more affordable alternative to the current line-up. The card will be priced and performed below the Radeon RX 6800 and will be a long way from the RX 6900 XT’s eye-watering $999 price tag. However, the RDNA 2 architecture will remain the same, which has shown to be capable in all aspects of gaming so far. The Navi 22 GPU, which is said to be at the heart of the RX 6700-series, would just be a smaller version of it.

With the RX 6800 XT outperforming the RTX 3080, the expectation is for more of the same to hold Nvidia on its toes in areas where it currently has little to no competition, such as the RTX 3060 Ti and the newly announced RTX 3060 12GB. However, it appears that we’ll have to wait for the RX 6700 to compete further down the stack.

Right now, AMD and Nvidia both have the same problem: bringing enough graphics cards into the channel for us PC gamers to buy. Without neurotic shopping habits, it’s difficult to find any of the new graphics cards in stock today. From minor parts to memory to the new GPUs, shortages are having a negative impact on the PC gaming industry as a whole. This raises concerns about AMD’s ability to supply enough RX 6700-series graphics cards. 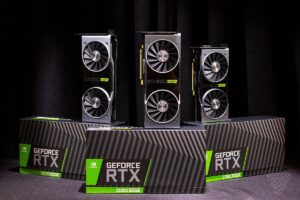