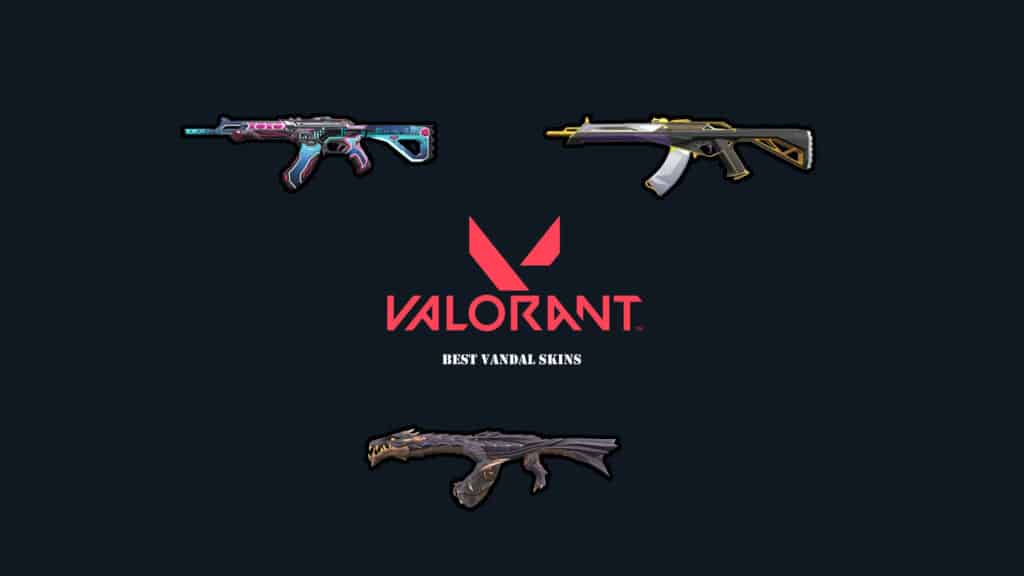 Vandal skins are the most popular among all other Valorant weapon skins. The reason is very simple: Vandal is considered the most useful and value-for-credit rifle in the Valorant game. It is very obvious for many players to buy better vandal skins if they are going to buy any skin at all.

If you want to get any vandal skin from the Valorant store page or its night market, it is better to know about the popular skins before you spend money. You don’t get any chance to sell or trade the skin as you can do on the steam marketplace. That being said, it’s really important to know about skins before you get them.

In this article, we’ve listed the 10 best vandal skins including the one from its battle passes and various Valorant skin bundles. We’ve made a similar list for phantom skins as well that you can also check.

Prime Vandal is the most popular vandal skin in Valorant. Players have submitted many tickets regarding the purchase to the Valorant Support Team. The animation, VFX, and Finisher of Prime Vandal just satisfies users and blow our mind. The Prime Collection was released on June 2nd, 2020, it leans heavily on gold plating much like the Aristocrat Collection.

The shooting sound of Prime vandal is the most common reason why people like it so much. If you are a Valorant player and don’t like prime vandal then the chance is you must be getting bullied by your friends every day.

We can call it Reaver 2.0 because Reaver Skins were released during BETA Version and they were a bit darker in look than the current version. Still, the Reaver Skin attracts users with its awesome reloading animation and the death animation. Also, its Kill effect with a sound effect just satisfies the user’s wants.

Reaver vandal skin is one of the most preferred choices because it has really good sound and animation while maintaining no extra distraction for the player. It is part of the Reaver collection that was released on October 26th, 2020.

After Prime Vandal, the most discussed Vandal skin is Elderflame Vandal, as its dragon animation, VFX and finisher attract users to keep using it.

Elderflame is one of the most unique weapon skin ideas by the Valorant team. A fire-breathing dragon animation every time you reload the weapon gives a whole different experience. Many would say that there is no point in having a distracting weapon skin when playing an FPS game but Elderflame proved them wrong.

Glitchpop vandal not only looks colorful but also has really interesting glitchy animation and effects. When it was released by Valorant, within hours it has become the most actively discussed vandal skin.

With its awesome look, VFX effects, and animation with Finisher, Glitchpop vandal is one of the best skins for showing off in the game. It is part of the Glitchpop 2.0 Collection that is newly released on February 4th, 2021.

The forsaken vandal is one of the latest skins on Valorant store. This new skin is similar in look to the reaver vandal but with a different sound and kill effects. However, the skin couldn’t get more popular among old players because most of them already have big collections of skins in their inventory like Prime, Elderflame, or Reaver, etc.

Forsaken Vandal is ideal skin for those who don’t have any other vandal skin and want to have something that not everybody else is having, The skin was introduced in the forsaken collection that was released on 20 June 2021.

One thing that sets origin vandal apart is its kill effect. The final kill effect summons a mysterious ring to abduct the enemy player before disappearing in a flash of green light. It has metallic sound effects and round pulls out animation that sets it apart from other skins.

It is an ideal skin for you if you can get on with the distraction it brings while gameplay. No doubt it’s a good vandal skin but it can become very distracting for new players.

Tethered Realms Vandal is made with the combination of two themes: sovereign and forsaken. It automatically changes the theme whenever the player moves from a light area into a dark area, and vice versa. When the player is standing in a light area; the Vandal uses the Forsaken theme. In dark areas, the weapons will swap themes.

It’s a really good skin but lacks many upgrades and effects that you can get from other skins.

Silvanus Vandal is a very elegant vandal skin without any VFX or animation but with a nice look. The skin has a nice animated ‘snowfall at night’ design which animates as you move with the weapon or look around. If you are looking for the best vandal skin for a cheaper price and less distraction, you can go for Silvanus Vandal.

The Winterwunderland vandal differs from every Vandal default skins. The reflection and shininess of this skin make it look more attractive. It reflects darkness when in light and shines away when in Dark. It also doesn’t have any VFX effects or any animation. The Winterwunderland Collection was released on December 9, 2020.

The Wasteland Vandal is made up of waste materials or recycling materials that look good and attract users in that way. The Wasteland Collection was released in November 2020.

We hope, this article might have helped you choose the right skin for Vandal, and do comment about your favorite one.