In Swift, functions are flexible, easy to declare, define and understand, unlike complex Objective-C-style method where we have names and argument labels for each parameter. In this article, we will see how to define and declare functions in Swift, what are “Parameters”, how to call functions later in the code, functions with the return values and nested functions. So, let’s get started.

What are the Functions and Why we need them?

We generally have either a user-defined function that is custom made as per our need or the pre-defined that is a readymade package to use them directly without writing any logic.

Benefits of using Functions in your programming

A function definition in any programming consists of some parts and in Swift, we have the same terminology as we have in others.

‘func’ is the keyword to start a function in Swift and then it is followed by the function name. Here we have ‘startEngine’ as our function name.

Here, price and name are the parameters of the function ‘myFunction’.

NOTE:- Every function in Swift has a type, consisting of the function’s parameter types and return type. You can use this type like any other type in Swift, which makes it easy to pass functions as parameters to other functions, and to return functions from functions. Functions can also be written within other functions to encapsulate useful functionality within a nested function scope.

Also Read:- What Is “Optional” In Swift Programming Language?

Calling a Function in Swift

While creating a Swift function, you give a definition of what the function has to do. To use a function and implement its functionality, you will have to call that function to perform a defined task and at a distinct time. Now, let’s write an example to implement a function and then calling it to execute itself.

Function to swap to numbers:-

So, this way you can call a function just by typing its name.

Functions can also be modified to take values at any instance rather than hard cording the associated values. In the rounds brackets, we can pass the parameters we want. For example:-

func getItems(){ // this round brackets takes an input or you can say parameters.

Now, behind the scene, the parameters ‘itemName’ and ‘howMuchQuantity’ is passed to the function definition and then it gets placed to the placeholder of as written in the print statement above.

So far, we have seen the function that essentially just package up the definitions or the parameters but, in Swift, you can do much more than that. A function can take an input and can return an output as we saw in the first example where our code was returning a boolean. For Example:

The (->) symbol is used to return any type in the function declaration.

Note:- The return value of a function can be ignored when it is called, for example, 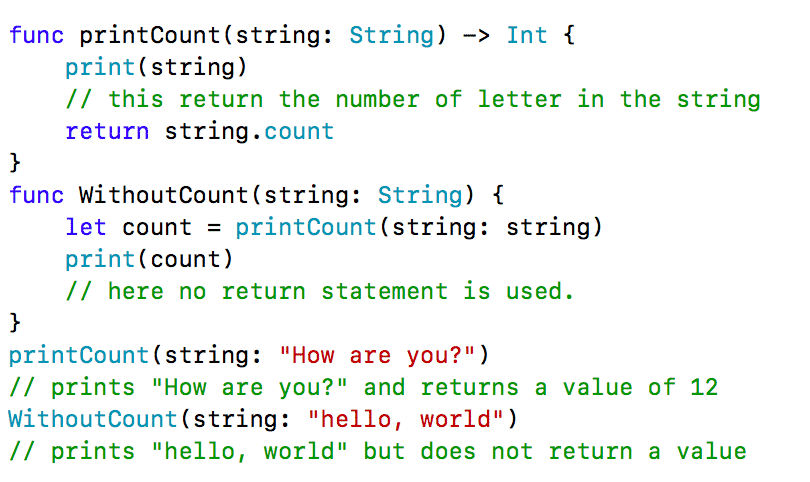 A function in Swift can have multiple return values. For Example

The function, ‘heightOfPerson’ actually returns a Tuple datatype i.e min and max. You can also use optionals for the return type if you feel that the values may or may not have any value associated with them as:- 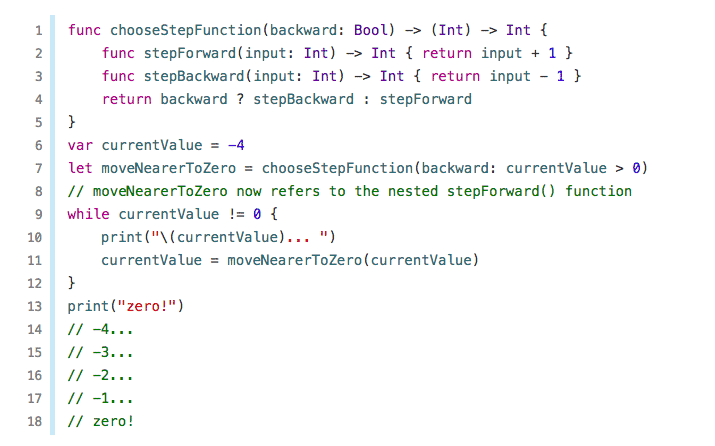 Well, this was for today. In the next article, we will see what are Completion Handlers and how we define them with function. Do share the post so that others can reach this one.