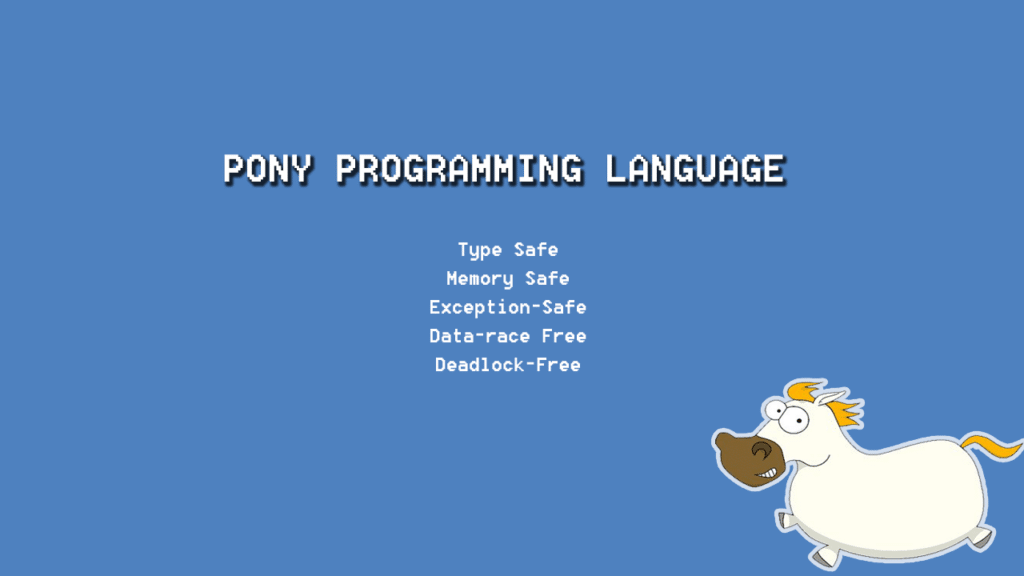 Wallaroo, a distributed data processing framework for building high-performance streaming data applications couldn’t handle the high throughput and low-latency workloads. So the developers had to come up with a proper solution for that. That led them to make use of Pony Programming language. Designed by Sylvan Clebsch, Pony is a new programming language capable of solving the hard problems in computing systems.

Featured: 6 New Programming Languages you should get to know

What is Pony Programming Language?

Pony computer language is the new entrant into the world of programming. It is a very special coding language because it possesses all the features to solve the most complex concurrent problems faced by the computing systems. The language was designed by

Pony is an open source, object-oriented, actor-model, capabilities-secure, high-performance programming language. It is an ahead-of-time (AOT) compiled language. There is no interpreter nor virtual machine.

Pony’s philosophy is to “get-stuff-done” with its characteristics such as correctness, performance, simplicity, consistency, and completeness. But the primary areas that emphasis to use Pony programming language is correctness and performance.

As Pony is the new face of the programming world it consists of a small but lively community of developers. Even the members of Wallaro labs and other open-source community activity improve on runtime and standard library of the language.

Pony language is highly concurrent that is build using actor-model of computation. An actor-model is a bit similar to “managed threads” where Actors communicate through asynchronous message passing. For building high performance and coordination systems, asynchronous message passing will make modeling more manageable. Keeping this in mind, Pony’s runtime and scheduler implementation are highly concurrent that works with modern CPU architectures and process as efficient as possible.

There is no incorrectness allowed by Pony. Every result is correct and accurate because it is the programming language that emphasizes the term “get-stuff-done”.

Reference capability is one of the rich features of Pony programming language that allows the compiler to assure that you aren’t breaking data safety. Reference capabilities are part of the type of objects and it isolates data by creating single reference pointer to data.

The language is fast and efficient because of actor-model capabilities. Actors in the Pony are scheduled using the work-stealing scheduler. As a result, there’s single pony scheduler per available CPU. This way pony works as efficient as possible with available CPU’s.

The runtime of Pony also features per-actor heaps, so the garbage collection takes place consistently. It will help the Pony programs to run fast and end up with predictable latencies.

Pro and Cons of Pony Programming

Get started with Pony by visiting the Learn Section of the Pony official website. As it is open source, you can also contribute solving this beginner-friendly issues on Github