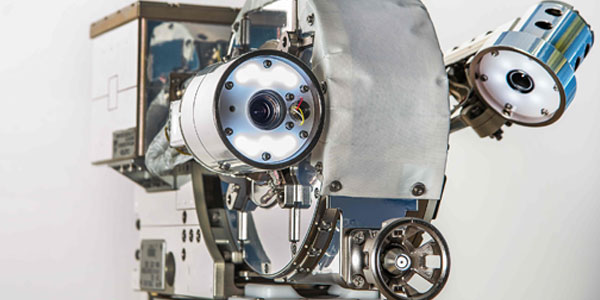 It’s been two years since the Robotic Refueling Mission (RRM) was last dynamic on board the ISS, however now it’s back with new capacities to offer. The RRM was initially an exploratory bunch of devices that could refuel the force tanks of satellites while in circle. With the assistance of Dextre, the station’s mechanical arm, the Satellite Servicing Capabilities Office (SSCO) has cleaned the module off and equipped it with a fresh out of the box new apparatus called “Visual Inspection Poseable Invertebrate Robot.” VIPIR gives ground controllers the capacity to review satellites in low-Earth/geosynchronous circle and swap instruments out if necessary without needing to send a team to space.

The device takes after an old film reel, as should be obvious above, however its cameras unmistakably imply that it’s a considerable measure more progressed than its clone. Two of those three cameras are little and are as of now utilized for restorative purposes like endoscopy. As indicated by SSCO appointee administrator Benjamin Reed, the RRM group chose to include the new apparatus, in light of the fact that it’s one of the group’s most asked for elements:

When asked about some information about their needs, they more than once heard how significant an examination ability could be for insurance agencies and satellite makers. Having the capacity to see precisely how or why a segment fizzled on circle could mean the contrast between dispatching more rocket with the same defective plan, or making a fix on the ground mechanical production system.

The RRM will start testing and showing its new capacities in the not so distant future, so we’ll in all probability hear how VIPIR fared before the end of 2015 or mid 2016.