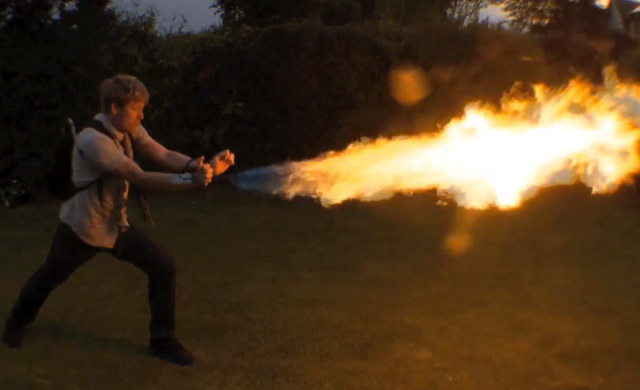 Gadgets sometimes are so advanced they seem to create an illusion. Obviously virtual reality is one on the top of the stack but gadgets like Hendo Hoverboard also fall in this category. Occulus Rift has taken many people aback with its fantastic features but all of it exists in other reality, a parallel world, as soon as you remove it, you are right here where the reality strikes back. I am talking about some other class of gadgets that bring a new spark to this very existing dimension where the reality seems to become a figment of imagination. Well, all this happens only in superhero comics, we all agree to that. But what if a gadget is invented to render that superhuman power in you. The technology has not yet aced enough to build up an iron man suit but a gadget that can release fireballs when worn on your wrist has been invented.

Such a gadget could only be invented by an illusionist. Adam Wilber has put in his hard work to invent Pyro fireshooter to add that spark in his performances. Adam Wilber took the inspiration for this device from the flamethrowers often used in his shows. But his idea was to provide his audience with a much more dangerous and breathtaking phenomenon. A magician releasing fireballs from his palm counts as one of them.

Pyro is basically a miniature model of the flashgun which uses paper treated with specific chemical and cotton. This combination burn instantaneously and is the driving component of this gadget. Wilber has specialized in his fieldwork of illusion where he wrote books about trick, produced his own video DVD sessions, the invention of Pyro is just the next step for him. Prior to the current working model, four prototypes were build and it took about two complete years to make this device efficient and secure for use.

To use Pyro all you have to do is wear it as a watch. Pyro has a wearable strap though which it can be worn and is quite compact in size. It is activated using a button which acts as a trigger for the device. By pushing the button the device releases fireballs. This button can be put in another hand or in your pocket depending on your feasibility. Since it has such a simple machinery and compact size it can also be used as a spy gadget. Women can also wear it as weapon for security but its reliability in stressful situations is compromised.