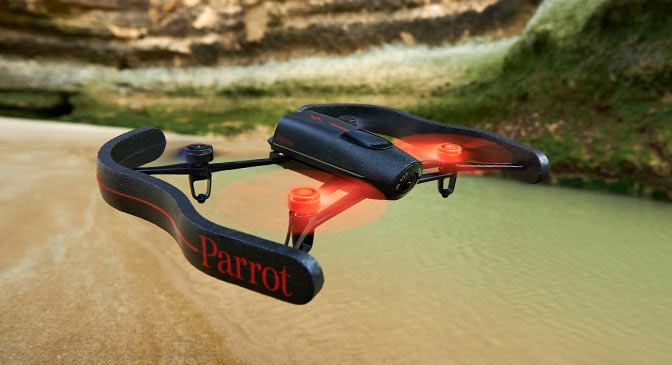 Definitely the next trend in technology are the drones. The recent years have witnessed a steady rise in the production of various drones to simplify automated machines as we know it. Many major projects have hit the market like IRIS+, project wings, etc. Once thoroughly questioned about reliability, now these drones are accepted widespread for the services they are able to provide remotely. These automated machines not only provide efficient controls over the designated tasks but also have a little tiny room to take standalone decision based on its artificial intelligence. Parrot had earlier announced its two new products, the Skycontroller and Bebop drone. The time has come after such a long wait when the Bebop drone will finally arrive in the market. The Bebop drone is scheduled to hit the market in December this year with a price of mighty $500 on its head.

The introductory features of Bebop are very fascinating. It has a 14-megapixel, 1080p camera which will not only provide high pixel formation but its fisheye lens has the capability of capturing a 180-degree view. To store the input it captures it has 8GB of onboard flash storage which will provide enough security to ensure that your collected data will remain intact till it reaches you. The Bebop drones biggest advantage is that is has a featherweight frame which according to the company is quite strong, robust and safe. To enhance its functionality, the Bebop drone coupled with the Skycontroller edition worth $900, will extend the range of the drone to about 2 kilometers.

This amazing drone can provide you an enhanced graphic visualization live by pairing with virtual reality headsets, such as the Oculus Rift. Using the virtual reality headset you can also control camera angles from a far off distance. In case any collision occurs, the propellers of Bebop drone stop automatically to secure it from any further damage. The emergency mode of this drone allows it to land as soon as possible. It has a GPS system in built that facilitates it to come back to launching place using Return Home function. It brings the drone back to the point of take-off. To induce a final security step the EPP hulls included in the drone pack makes indoor flights much safer.

Parrot Bebop Drone has eluding structure and provides great efficiency without compromising in any aspect. The biggest evaluation factor has been kept in mind while designing Bebop drone that is the battery life: It has up to 8x times more powerful battery support than Parrot AR.Drone 2.0 onboard computer. The navigational computer feature of Bebop drone has a Parrot P7 dual-core CPU and it is accompanied by a quad-core GPU. Flash memory is provided separately. All these components are fixed over a magnesium shelf. This magnesium shelf acts as electromagnetic shielding and also provides the functionality of a radiator. This drone runs on Linux kernel. Keeping in mind the various developers SDK is also available.