Latest technological advancements have been used to prepare better versions of robots and gadgets. From a physical keypad we have now moved to touchscreens and are looking forward to virtual reality controlling mechanism for tomorrow.

The robots being developed have also significantly changed owing to the design and functionality parameters. And these techniques are also being used to prepare drones, which are actually being called the gadgets of the day. Recently many drones have been launched and major tech- companies are pursuing projects manufacturing drones like Google with its Project Wing. Soon many of the tasks will be accomplished using these drones like spraying fields, delivering urgent medical aids and of course for supervision. A new name has been added in this category, The Ghost Drone, which is a quad copter that can be manipulated using your very own smartphone.

Mostly drones come with a bulky set of remote controller with complex operations which are very hard to understand at first. The developers of Ehang Company saw the opportunity in this error and sought to build a ghost drone which will be very easy to operate and will be controlled using any type of smartphone you own. This feature of ghost drone also eliminates the requirements of a co- pilot as the various setting and commands can be executed with just one tap. Although the communication between the ghost drone and smartphone is not direct, the company provides a G- box that interfaces both the devices.

It is a perfect tool for aerial photography and will be very handy to have a glimpse of far to reach places. The auto- follow mode of ghost drone  holds the camera focus on you and the 2-D gimbal fits a GoPro camera that enable the ghost drone to keep the shot still. It is available in four basic colors: white, black, red and blue to suit your taste. While taking a shot you don’t need to focus on handling the ghost  drone any more, you can easily shift to auto mode and click your shot perfectly. 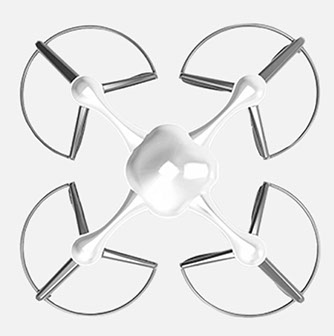 It also has a navigational feature where you just need to direct it to the position and the ghost drone will fly by itself to the designated point. The app has special bars that will allow you to adjust the height and orientation of your drone. Vertical bar is provided to control the height and horizontal bar adjusts the rotational angle of the drone to snap a picture of perfect fit. The app also has additional features that lets you handle the camera independently. You can tilt the camera upwards and downwards, as well as left and right.

Sometimes it becomes very difficult to move your drone for slight distances to reach the perfect spot. The developers of ghost drone have overcome this bug by installing micro control feature that lets you make more precise adjustments to the position of the drone. Ghost drone has also excelled all the parameters of robustness. The ghost drone not only water proof but it is also wind resistance. It also has the ability to return automatically to the original position if the connection between the smartphone and the drone terminates.