Since technology is improving almost all the aspects of life are changing its form. Not only the smartphones or computer are becoming more efficient and reliable, this advancement is being used to moderate many other gadgets too. We have now come to the age where the rule of robots can be apprehended. And in such an era it would become too primitive of behavior if other important gadgets are neglected from a makeover. Take for example weather forecasting. Throughout the centuries, attempts have been made to produce forecasts based on weather lore and personal observations. The first known design in western civilization for a hygrometer, an instrument to measure the humidity of air, was described by Nicholas Cusa in the mid-fifteenth century.  Since then many changes have been introduced in such type of devices to shape out a gadget that perfectly portrays the weather to unfold. And today we have the Tempescope, a perfect weather forecaster for your work desk. 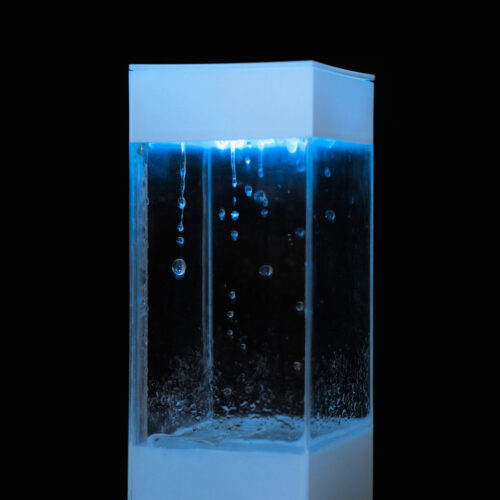 Obviously you could just download a weather app to see what conditions are like outside your porch, but where is the fun in that! Ken Kawamoto’s Tempescope is actually a physical display that can reproduce and ambiently notify the weather conditions, inside your room. The creators of Tempescope call it a physical weather display that visualizes and analyses the weather by actually reconstructing the weather conditions inside a box case. With a very simple and sober design it will absolutely adore your work desk or room and can even be used as decorative element. Tempescope creates weather conditions based on the weather forecast for the next day inside of a box. For example, if it is going to rain tomorrow, Tempescope will create its own rain and even flashing lights to represent lightning and thunder, though it doesn’t produce the sound effects (But either ways it would be too much to be asking from). The box can create its own clouds too. You can actually witness the changes weather is going into and plan your trips and picnics accordingly.

Basically, it’s just an acrylic box with a water pump, mist diffuser, and LEDs inside, plus an Arduino microcomputer to control the whole thing. The Arduino can wirelessly sync up with a computer or even a smartphone app to download hourly forecasts from the internet. Moreover it is simple enough to build your very own, particularly because the creators provide all the instructions and diagram. It can be fun project to work on along with your kids. Kawamoto also plans to crowdfund the idea next year. For now, it might be the next best thing to actually controlling the weather. There are currently two modes of operation, both of which run as PC programs. The first one is “Tomorrow’s weather”, which animates tomorrow’s weather forecast, and the second one is “World weather”, which reproduces the current weather of any location in the world. While the former is what Kawamoto originally intended to make, the latter may be what makes Tempescope interesting, and really worth working on in the future. One can view the device as containing a teleported slice of a remote world, a little Paris in your room.