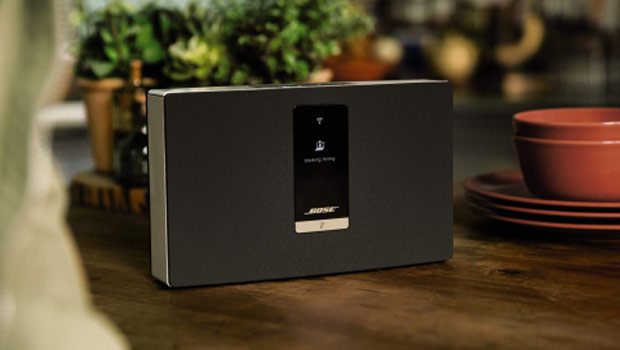 Music enriches the soul soothes the mind. All the latest smart devices have an option of playing sound tracks. Smartphones, teblets, even car systems. Many companies have launched various top notch products related to this field. Almost every month new stereo system models are being released incorporating many new features like Wi-Fi connectivity and karaoke. New design are expected in the market that are not only compact but also do not compromise on the quality of output. It should look smart and futuristic at the same time. After the release of Om’s Bluetooth Levitating Speaker, next in line we have Bose’s second generation multi-room wireless speakers, dubbed SoundTouch Series II.

The demand for the portable speaker around the house is increasing and to meet it Bose has launched SoundTouch II, which is kicking off with three new speakers before expanding to a number of other Bose products. The new speakers come in three different sizes: the SoundTouch 30 is the biggest speaker, with a built-in woofer and meant for large rooms; the SoundTouch 20 slightly smaller, for a bedroom or kitchen. The flagship SoundTouch 30 Series II is priced $700, followed by the midsize SoundTouch 20 Series II priced $400 and wrapping with the SoundTouch Portable Series II priced $400. While the two larger models are designed to take residence in a specific room and serve it up with wireless audio, the Portable model includes a built-in rechargeable battery so it can be hauled around anywhere it is needed. Bose also added a black color option to its existing white finish for this year. The SoundTouch wireless audio system is what links all these speakers together, allowing them to connect to your home Wi-Fi network for universal control of music through your entire house.

Digital Trends reviewed the original SoundTouch 20 at the beginning of the year, and while we found it performed well in the sound quality department, its shortcomings were in the list of apps it supported, and a slightly clunky interface for the app that operated the system. Bose claims its new systems are easier to use than before, and designed to offer listeners an unprecedentedly simple experience — a trait Bose has built its reputation on.  Bose sets itself apart from the competition with the deep integration of car audio-like presets. Each of the three SoundTouch speakers have buttons numbered one through six, which will instantly play whatever audio they’ve been assigned. Buttons can be set to a specific internet radio station, an album or artist from your home network, or even a single song. Once set, the presets are universal across all the speakers on the network, allowing anyone to immediately play their favorite music in any room with the single press of a button. The new SoundTouch Series II speakers are available now at Bose retail stores, Bose.com and authorized Bose dealers. The new music services and enhanced app functionality are also available via free software upgrades for all existing SoundTouch devices. We put all your music in one place. Now we can control it in the easiest way available, and personalize it for what we love and how we live.