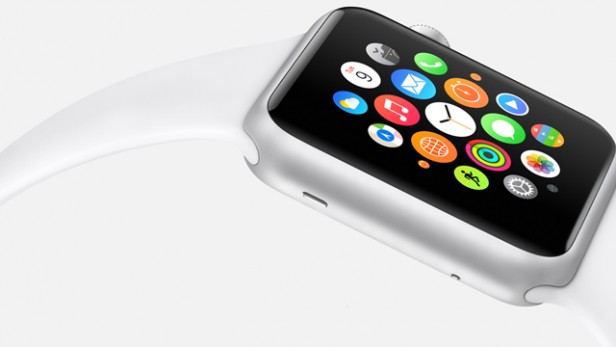 When every other company in the technical field is taking leaps in the field of wearable technology how could we expect the giant Apple Inc. to stay behind in such a venture. The current CEO of Apple Inc. has taken up his responsibilities quite seriously after the world witnessed the sad demise of Apple founder Steve Jobbs, may be this is the reason why Tim Cook wanted to take the world by the storm. Not only did he plan to release two splendid work of technology iPhone6 and iPhone6 Plus together, he also revealed the Apple iWatch to play on the nerves of crazy Apple fans. Now that was one hell of a marketing strategy which paid off in full. Apple has un-curtained its latest werable gear that is the iWatch.

Apple’s Watch is designed to be both fashionable and functional, available in an array of different color and materials with six different types of watch straps that are easily interchangeable. Apple has clearly understood the fact that technology must meet the fashion standards too. Apple Watch collection has stainless steel or space black stainless steel cases combined with a range of metal and leather bands, the Watch Sport collection, which includes anodized aluminum cases in silver or space gray with colorful, durable bands, and the Apple Watch Edition, which includes 18-karat gold cases in yellow or rose with “exquisitely crafted” bands and closures. All of Apple’s Watches can be customized with an array of different digital watch faces to suit different tastes. Each of the watches is available in two separate screen sizes for different sized wrists: 38mm and 42mm, and the watches have a flexible, durable sapphire display. It features a custom iOS UI that offers wrist-worn app action with a press sensitive touch screen, haptic feedback and a special Digital Crown build into the Watch’s winder. 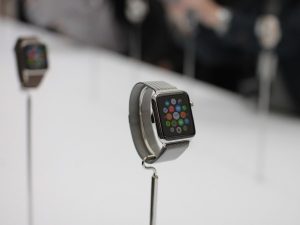 When it launches in early 2015, it will be up against the army of Android Wear devices already on the market, which by that time will include the Motorola Moto 360, Samsung Gear Live and LG G Watch. Hopefully with the prestige the company holds, this product will not let these rivals let it down. Each Apple Watch is kitted out with a Retina display, which Apple claims is extremely energy efficient, although won’t give exact figures on how long the Watch will last. The device also takes advantage of new pressure-sensing technology and is able to determine the difference between a tap and a press, allowing for a new range of contextually specific controls. A second physical button next to the digital crown lets users tap to bring up a list of contacts and then communicate with friends by sending quick drawings, messages, and animated emoji. It’s also possible to send a heart beat, drawn from the watch’s sensors. Inside the device, there’s a new Taptic Engine that allows users to hear and feel the design of the user interface. According to Apple, users will be able to feel and respond to notifications easily and intuitively through the Taptic Engine. As with the new features coming in iOS 8 and OS X Mavericks, the Apple Watch will let you start reading or doing something on your wrist and then pick it up later on the iPhone.