Apparently smartness is everywhere. This age is itself being called the smart age, we have smartphones, smart laptops, smart robots and even smart home automation devices. We have smart security systems, smart home temperature controls, smart ovens and everything that should be in a household. It is time to get smart vacuum cleaners also. Yes, indeed humans have now transferred a piece of their smartness in vacuum cleaners also and we have the first ever model of such an exemplary concept, the Dyson’s 360 Eye Vacuum Cleaner. Dyson, the British company that created the cyclone vacuum cleaner, Airblade hand drier, and the bladeless fan, is finally stepping out onto the bleeding edge of high-tech suction and blowing. The Dyson 360 Eye is the first truly intelligent autonomous robotic vacuum cleaner that can see its entire environment and then plan a route around it. Dyson claims that it has more suction power than other robotic vacuum cleaners, and is designed so that it can actually clean properly. It has taken 16 years but James Dyson has achieved one of his dreams: to build a robotic vacuum cleaner. As befits a device of the modern age, it can be controlled remotely via a smartphone app – and reports on where it has been. Apparently it was almost launched way back in 2001, too, but the company stops short of explaining why it waited another 13 years.  In the intervening 13 years, the company was able to vastly reduce the number of infrared sensors. Using eight sensors and a quick-snapping 360-degree camera, the 360 Eye can map out a detailed floor plan to navigate a room. The Dyson 360 Eye relies on two breakthroughs: a machine vision system that takes in a whole room from a single camera lens and a powerful lightweight digital motor that enhances battery life. It took 16 years and $47 million to develop the Dyson 360 Eye, whether it is actually worthy of such a big portion of time and economy, only time will prove. 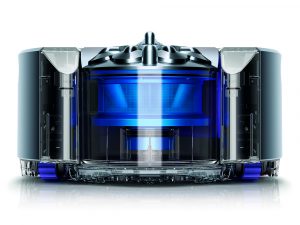 There are two core technologies that power the 360 Eye: The V2 Dyson digital motor, and Dyson Digital Algebra. Dyson’s cordless vacuum cleaners all use a “digital motor,” rather than a conventional brushed DC motor. “Digital” is somewhat overstating it, but basically it’s an alternative motor design that allows for much higher RPMs and thus a more efficient, higher-suction vacuum cleaner. The Dyson Digital Algebra is the software that powers the robotic vacuum cleaner’s computer vision system. Basically, on top of the machine there’s a 360-degree panoramic camera that allows it to track its position. as it moves around the room, and infrared sensors to detect nearby obstacles. This allows the Eye 360 to plan an intelligent route around a room, rather than discovering a room by algorithmically bumping into things. The Dyson 360 Eye will launch in Japan in spring 2015, with the rest of the world to follow later in 2015. There’s no word on pricing, but I suspect it won’t be cheap.The Dyson 360 Eye could be the basis of a smarter, autonomous home that finally frees us from manually cleaning.