Apple has undoubtedly established itself very well in the technical market. The biggest proof of it is the fact that how anxiously people wait for it to come up with the release of its latest products. It seems that Tim Cook has the same motivation, inspiration and aims as Steve Jobbs once had regarding apple. He has now launched the next generation iPhone in the series of iPhones. The iphone6 and iphone6+ has taken the electronic media by the storm. With some highly efficient new additional features it is all set to hit the market. What remains still an obscured question is that will it be able to make the same impact as its predecessors?

These are the first new iPhones in two years after the iPhone 5s made its debut. The “old” iPhone 5 currently fits four app icons across its screen, but the iPhone 6 adds another row of icons at the bottom. So instead of viewing 16 apps in one glance as current iPhone users do, you’ll soon be seeing 20. The frame of the iPhone 6 is 6.9mm thick, and the iPhone 6 Plus 7.1mm thick which is all set to make it one of the slimmest phones. When iPhone 5 was released many made the accusations that it just had a bigger screen and nothing new. Well, it seems that Apple took this criticism personally and took a step further in changing the appearance of iPhone6. The design is a departure from recent models, with rounded sides replacing the sharp-edged, flat-sided iPhone 5S. Apple has definitely worked on the screen also. The iPhone 6 screen resolution is 1,334×750 pixels, which Apple describes as Retina HD and the iPhone 6 Plus features a full HD resolution of 1,920×1,080 pixels. The screen is protected by ion-strengthened glass. However, there was no sign of the super-tough sapphire crystal screens, which some commentators had expected to see in the new phone. 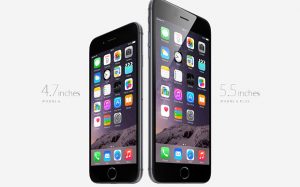 The iPhone 6 has improved camera specs. Although the sensor remains at eight megapixels, a new focusing and exposure system might improve image quality. The iPhone 6 Plus also has optical image stabilization. Both models can take slow-motion video at 240 frames per second. The larger screens will allow multi-tasking, allowing the user to see an email inbox and message at the same time, for example. The app dock can also be moved to the side of the screen, instead of the bottom. The new operating system, iOS8, also allows for greater camera control. Until now the only way to adjust the exposure of a photo before taking a shot was to tap on the screen to tell your device from where to take the exposure reading, In iOS 8 the camera lets you adjust the exposure much more precisely. Tapping on the screen now brings up an icon of the sun and, by moving a slider up and down, the image will get brighter or darker. Has Apple done a good job of this with the new iPhone 6? Time will tell, but today it appears that it has made some very wise choices.