With the latest release of Transformers: Age of Extinction, the transformers fever is on. Till this date the world has witnessed numerous inventions, robot topping the list, but we have never witnessed such an advanced technology which we can categorize into the transformer species. They have eluded us till now, being a mere concept. And now the time has come for this concept to unfold into a stark reality. With the onset of different kinds of robots we have reached a level where our scientists and researchers have gained the access to such a technology that can bring to life a transformer like robot. The Origami Robot. Folding robots are nothing new, but scientists from Harvard and MIT have taken it to the next level, by designing one that assembles itself and walks away to do its job with zero human input. The robots start out as a flat sheet of paper and polystyrene plastic etched with strategically placed hinges. Since those materials aren’t enough to make a full-fledged robot, the scientists also placed a flexible circuit board in the middle (with circuits extending to every hinge), two motors, a micro controller and two batteries. It’s the micro controller that’s in charge of activating the circuits to produce heat on command, which then leads to the flat sheet folding itself like an origami. When the hinges cool after a few minutes and the polystyrene hardens, the micro controller commands the robot to scuttle away and do its thing. The alien robots that feature in the Transformer movies conceal their true nature by taking on the form of cars and trucks. The scientists’ robot has yet to reach that level of technical deception and disguises itself – for now, at least – as a robot that has been flattened. The flat-pack robot uses “shape memory polymers” that contract like muscles when they are heated. The robot takes about four minutes to assemble from scratch and can walk at a speed of around 5 cm per second. 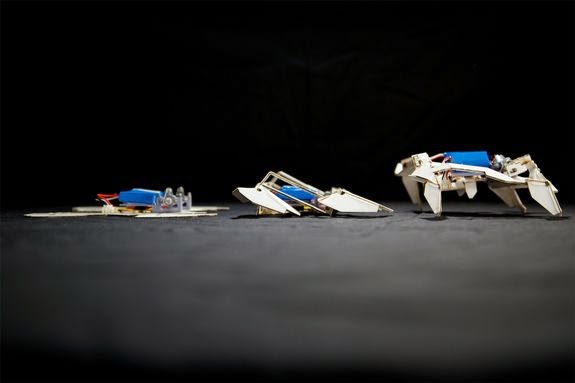 Inspired by self-assembly in nature — such as the way sequences of amino acids fold into complex proteins — the robot is the latest in a series of origami robots created over the last few years, including a printed, self-folding robotic inchworm, a self-assembling lamp and pop-up robotic bees. This, however, is the first that can build itself and perform a function without human intervention. The sheet is made of polystyrene and paper, with a single flexible circuit board in the middle, and hinges programmed to fold at specific angles. Each circuit produces heat on command about 10 seconds after power is connected, which triggers the sheet to fold. After four minutes, the polystyrene will have cooled and stiffened, and the robot can walk.
The self-assembling origami technology has interesting parallels with 3D printing, a technique that is beginning to revolutionize manufacturing. The 3D printing technique works by laying down successive thin layers of material, origami by folding thin sheets. The benefit of the origami-based technique is that it can produce results more quickly.
Share on Twitter Share on Facebook Share on LinkedIn Share on WhatsApp