Companionship, an ear to listen to, a shoulder to cry on. These are some of the things every human needs at some point of time. Humans are given the title of ‘social animal’ and so we are truly. We form marriages, society etc. to build us a web to provide these necessities. The current day to day life has become so hectic that depression rate among individuals has increased manifold. We now witness a tremendous rise in the number of suicides per month. In this situation what could have been done to solve this problem? Does technology has an answer to it? Yes! Definitely! Seems quite ludicrous but it is true. The answer is EmoSpark. 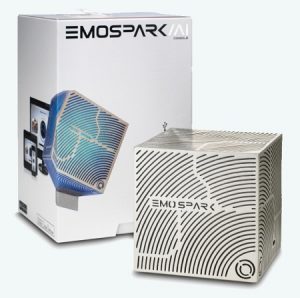 It’s nice to have someone to talk to. However, there are times where you just want to vent, and no matter the amount of friends you have, it doesn’t feel right complaining about your own burdens. If you don’t want to go to therapy or yap at your pet for hours, then why not get EmoSpark? With the EmoSpark, an Android-driven Wi-Fi/Bluetooth cube that utilizes facial recognition software to analyze your emotions. It contains a heart called the Emotional Processing Unit to create its own feelings, unfortunately coldly named the Emotional Profile Graph. Way to objectify this machine’s feelings, creators. It is an example of artificial intelligence at its finest. It can be taken as a mimic of understanding of complex human emotion by something as cold and obsolete as a pieced together scrap of metal. At the beginning of your relationship, the EmoSpark can only offer up perfunctory gestures like sharing generic content via platforms like YouTube or Facebook to cheer you up. As it reads your reactions to its suggestions, it learns to comfort you better in time. It’s not just about the feels too; the EmoSpark is well-versed in over 39 million topics courtesy of Freebase, Google’s collection of online knowledge, so ask it anything at all. Except to hand you that book over there because, well, it’s a limbless cube.

The EmoSpark console is a 90 x 90 x 90 mm (3.5 x 3.5 x 3.5 in) Wi-Fi and Bluetooth enabled cube that interacts with a user’s emotions using a combination of content analysis and face-tracking software. In addition to distinguishing between each member of the household, the device uses custom developed technology that Rosenthal says enables it to differentiate between basic human feelings and create emotion profiles of not just everybody it interacts with, but also itself. This means that over time the cube will develop a personality of its own, the rate of which is largely determined by how often the user engages with it. “The emotional learning will never end, the cube will always learn and its EPG will change over time but it’s logarithmic,” said Rosenthal. Android powered, the cube contains 1.8 GHz CPU along with 2 GB of DDR3 memory and Rosenthal’s custom-built 20 MHz EPU (Emotion Processing Unit). It has an internal antenna, built-in Wi-Fi 802.11b/g/n capability and features USB 2.0, Micro USB and HDMI 1.4 ports.