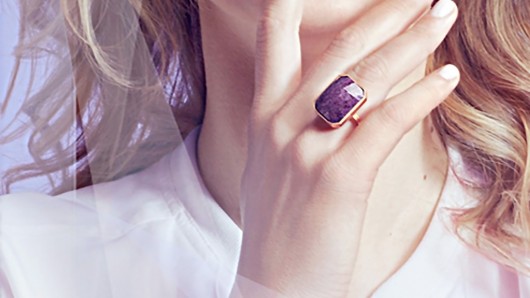 Fashion trends are constantly changing, everyday something new hits the market. With the advancing evolution in technology, fashion and technology are being considered one single entity. SMART is the new trend. Smart fashion sense coupled with smart technology, this is the current demand of the generation. With Google glass, smart wrist bands and smart watches, we have moved a great way ahead in bringing many applications to the swish of our fingers then why not bring them onto the finger literally. Nanotechnology is boosting coming up with compact circuits and devices almost every day. In such a scene, it has now become possible to provide all the applications on a ring. Named most aptly after its design the producers have christened it Ringly. The CEO Christina Mercando wants to bring some of the capabilities of a smartphone into your fingertips.

Ringly, a new iPhone-connected smart ring designed for women, uses Bluetooth LE to connect to a phone, lighting up and buzzing to alert users of calls, messages, emails, and other app notifications. Billed as the first connected ring, Ringly aims to allow users to continue to receive notifications even while a phone is put away in a bag or otherwise unavailable. The ring, which lasts for up to three days on a single charge, connects to an accompanying iPhone app to deliver notifications. Ringly is the latest fashion gadget, and it links important notifications from a smartphone via Bluetooth to a ring worn on the finger. There are four different rings, each with a different gemstone. In order to differentiate between the types of notifications, it has four different vibration patterns and a light indicator with five color shades on the ring’s side. Ringly can also be used for third-party apps such as Facebook, Twitter, Instagram, Uber, eBay, and Tinder. It has an average range of 20 to 30 feet. If you travel more than 15 to 20 feet away from your phone and leave it behind by accident, the ring will alert you. It can be useful at home, where the phone might not always be in your pocket. It is also waterproof to some extent. Ringly can be worn while washing your hands, but it’s not recommended to wear it if you’re going for a swim.

Ringly is just one of many companies looking to tap into the rapidly burgeoning wearable technology business, an industry that has lured in big players such as Apple and Samsung, which are investing in fitness technology and smartwatches. Despite the promise of exploding consumer demand, sales of such have been slow and disappointing. Its accelerometer can tell if the ring is not in motion, allowing it to go into sleep mode. To make sure the ring is working, you can tap your pointer finger and thumb together while wearing it and it should light up.With Ringly, the wearer uses an app to program the combinations of vibrations and subtle lighting to customize each notification. Ringly comes with its own ring box that also serves double duty as the ring’s charger. Ringly expects to begin shipping the first round of orders in the fall and has also announced that it is working on a men’s version.