Since the mobile platforms has shifted from Symbian, Sailfish, Tizen and many other operating systems to android series, a whole new wide vista of applications has opened along in its wake. There are numerous apps that have been developed to encompass almost all the functionality a mobile can provide, some are so exceptional that at one time it was considered an impossible thought for a mobile phone to provide such functionality like controlling a robot through Bluetooth via an app. And yet there is a lot more in store to achieve. A new app has been launched that lets you mark real life places to your text, a modification of how we perceive leaving messages. ‘Traces’ lets you leave secrets on street corners. 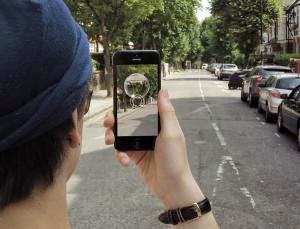 This app works in a manner that is most intriguing. It lets you send a message to your friend suggesting to go to a nearby street corner. On reaching the designated place, you hold up your smartphone and see a water droplet hovering in mid-air. You align an on-screen target with the droplet, bursting it to reveal details of the surprise the messenger has to offer. The message might contain any additional image or a video clip, further more even a document like an e-ticket for the designated place. Traces is now available on Apple’s app store. The team behind this brilliant and absolutely innovative app believes that linking content-stuffed messages to a physical location, and using augmented reality to make it seem tangible, will add real-world context to social media. This app was produced by Ripple Inc. based in San Francisco.

Furthermore, it is very specific regarding the location it designates. This app does not let you open the message till it receives the data of the person accessing the message and synchronizes it with the location address specified by the sender. It executes this task of managing and ensuring exact location by monitoring the data received by GPS. To send a trace, the sender simply selects a person from their contact list, drops a pin in the map where they want it to be visible – and for how long – and then uploads whatever content they want to leave there. Recipients of a trace get an alert on their phone with a map showing where their message can be collected – and who has sent it. “Instead of reading tweets in a random location you can choose the location to add context to your delivery,” says Beau Lotto CEO of Ripple Inc. The app exploits aspects of human psychology that Lotto, also a research neuroscientist at University College London, thinks will make it more engaging than traditional social media. This app can even let you trigger special memories with your receiver for example, you could leave a piece of music for someone in a location meaningful to both of you, like where you first met; taking the level of romance to a whole new level even being miles of distance apart.