It is undoubtedly a unanimous notion that the invention of touch screen technology revolutionized the universe of gadgets. It not only enabled designers to improve the performance quality but also reduced the size of the gadgets. But it is a common understanding that humans are to stop at nothing. So even this touchscreen technology is now being considered below the bar to what the future has in store for us. With the onset of gesture control, voice recognition and hologram technologies the human race is all set to step into entirely new light of super enhanced gadgets. One such concept of evolution is adopted by many well-known names of the technology market, Google and Apple being the first ones. 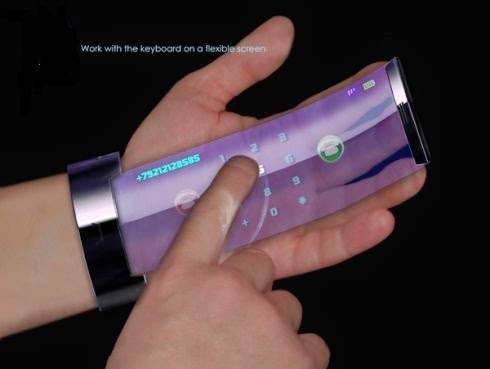 Researchers are developing a revolutionary new technology that puts the mobile phone on the palm of your hand — literally. Well the concept is to make the phone bodyless, that is, a mere holographic projection sensitive enough to recognize the manipulations done to the hologram. In the labs of Masatoshi Ishikawa and his colleagues at the University of Tokyo, a new ‘human-tech’ project is brewing that allows for mobile phones, computer screens and keyboards to be beamed onto palms or any moving objects. You won’t need a keyboard, you won’t need to carry a smartphone, or a computer. You can make a call without anything. It’s not exactly the next big smartphone, but if you spend one too many hours searching for that misplaced iPhone, this could be even better. With this technology you can never lose your phone. Ishikawa expects the technology to turn into a reality in a year or two. The ‘palm phone’ is the latest in a string of systems that Ishikawa has developed using high-speed vision technology.

Using a special camera that combines high-speed vision and two rotational mirrors, Masatoshi Ishikawa and his team at the Ishikawa Oku Laboratory here say they’ve found a way to project a device’s display screen or keyboard onto the palm, or any other surface, so that you can operate it remotely in your home or office. Ishikawa says the system can detect the movement of a three-dimensional object every two milliseconds. Put simply, the high-speed vision allows the program to track moving objects, so users would be free to walk with the phone image in palm, without the display ever shifting. The projection causes a faint tingling sensation in the palm when keys are pressed but this only adds to the authenticity of the technology. In a related experiment, Ishikawa tracked the movement of a ping pong ball down to the millisecond. This type of technology can be used to track lightning fast objects and hence can be applied to research in medical and gaming fields.

The computer system beams ultrasonic wave emitters, so users actually feels the keyboard pressing against their skin, without anything in their hand. The sensation is similar to holding a 3 gramme object. – See more at Ishikawa says his system is far more advanced than anything featured. Ishikawa now hopes to perfect the projection phone, so users can dial from their palms, and view 3-D images. The phone is strictly for indoor use only, and he doesn’t expect the complete system to be on the market for at least 5 to 6 years