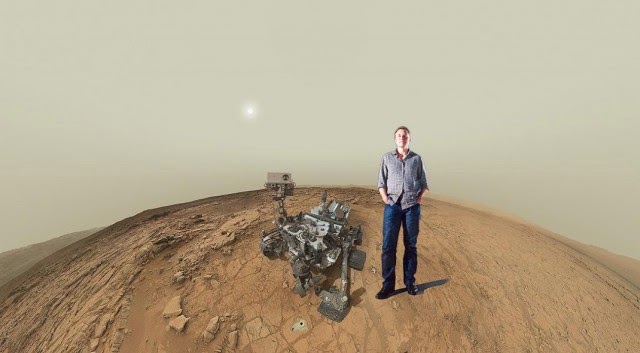 Elon Musk, speaking to CNBC about how the future of humankind is rather closely tied to our ability to get off this planet, is “hopeful that the first people could be taken to Mars in 10 to 12 years” — with SpaceX rockets and spacecraft, of course. This lines up with some of his previous comments about establishing a Mars colony in the 2020s. Meanwhile, NASA recently announced that it would try to put a human on Mars in 2035 — and only if it can secure the necessary funding and carry out a number of important milestone missions beforehand. Tantalizingly, Musk also spoke about SpaceX going public on the stock market — perhaps to raise the necessary funds to fly (and establish a colony?) on Mars.

Musk, CEO of SpaceX and Tesla, has long been an advocate of setting up a Mars colony. Way back in early 2012 he said he’d worked out a way of sending an “average person” on a round-trip to Mars for $500,000. His tune seems to be a little more muted now, but his new estimate of 10-12 years — before 2026 — is still fairly optimistic. To get there, SpaceX would probably use the Falcon Heavy launch vehicle (basically the Falcon 9 but with two huge booster rockets stuck onto it), and a variant of the recently announced manned Dragon spaceship. NASA’s Mars mission would use the Orion spacecraft (which is finally almost ready for testing), and the new Space Launch System (which isn’t expected to be ready for a few years yet).

Actually getting humans to Mars isn’t all that difficult. Yes, the journey is quite long (around 200 days) and there’s a risk of radiation exposure, but these are fairly small problems compared to a) landing on Mars, b) surviving on Mars, and c) getting back to Earth. This is the area where NASA — which has landed and taken off from the Moon, and landed a huge rover on Mars — has a lot more experience than SpaceX. SpaceX hasn’t yet landed on the Moon — and, at least publicly, it has shared very few plans about how or when it would attempt such a landing. The upcoming manned Dragon capsule will ferry astronauts to the ISS, but it isn’t equipped for a lunar landing or takeoff. This isn’t to say that SpaceX couldn’t develop and test the various, exceedingly complex systems required for a Martian landing and takeoff, but 10-12 years is a pretty tight timeline.

The more likely possibility, unless society somehow finds itself entering into a second Space Race, is that SpaceX will send astronauts on a Mars flyby in the 2020s, rather than actually landing and setting up a colony. It’s fun (scary?) to think that a commercial company — headed up by Elon Musk no less — will be the first to colonize Mars, but I doubt it. “I’m hopeful that the first people could be taken to Mars in 10 to 12 years,” said Musk on CNBC’s Closing Bell show. “But the thing that matters long term is to have a self-sustaining city on Mars, to make life multiplanetary.” (In case we wipe ourselves out.)

Musk also covered some other interesting topics in the CNBC interview. When asked about SpaceX going public, he said “We need to get where things a steady and predictable. Maybe [when] we’re close to developing the Mars vehicle, or ideally we’ve flown it a few times, then I think going public would make more sense.” He also spoke about SpaceX vying for government contracts, and how the Dragon V2 will be competing against other big players (most notably Boeing) for NASA’s Commercial Crew Program to take astronauts to the ISS. “It’s possible that we may not win the commercial crew contract… [but] we’ll do our best to continue on our own, with our own money.”
Source : ExtremeTech
Share on Twitter Share on Facebook Share on LinkedIn Share on WhatsApp